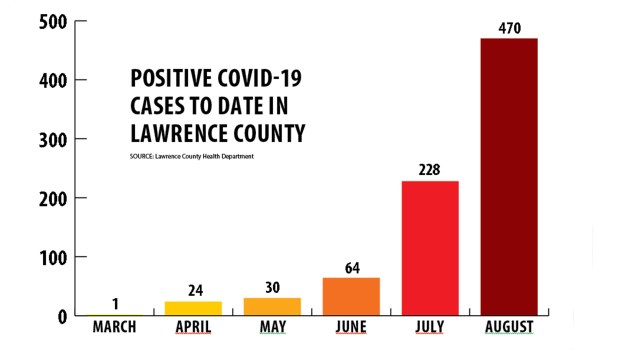 These next weeks will mark six months since the COVID-19 pandemic began to impact the United States and Ohio.

It was on March 9 that the state saw its first confirmed case, which was followed two days later by the date in which the crisis hit home for most Americans.

On March 15, President Donald Trump addressed the U.S. on the pandemic in primetime and the NBA canceled games after a player tested positive.

The next day, Gov. Mike DeWine ordered all Ohio K-12 schools closed for an extended spring break, which would eventually stretch out for the remainder of the academic year.

It would be another week and a half until Lawrence County saw its first positive case of the virus on March 25, three days after DeWine issued a stay-at-home order for the state.

As the following weeks progressed, terms such as “social distancing,” “facial coverings” and “virtual events” began to become common in American life, while students began taking part in remote learning, businesses were closed to the public and mainstay events, such as the Ironton-Lawrence County Memorial Day Parade and the Lawrence County Fair were either canceled for the year or held in scaled-down form.

In Lawrence County, the number of positive cases climbed slowly at a few a day, before beginning to spike dramatically in the week following Independence Day.

The spread of the virus led to the county being listed at Red Level Three on the state’s COVID-19 alert map for two weeks, from July 23-Aug. 6, before being downgraded in severity back to Level Two.

Masks have been mandatory in public settings in Lawrence County since Ohio Gov. Mike DeWine issued a statewide order on July 23.

The last few updates of the COVID-19 alert system for Ohio have seen fewer counties listed in the Level Three designation and none at Level Four, an improvement from earlier in the summer, when DeWine addressed the state on a spike in cases.

Debbie Fisher, public information officer and nurse for the Lawrence County Health Department, said the number of confirmed cases to date stood at 470 as of Monday.

“We were red for a while,” she said of the alert system, but added that number of new cases has been dropping recently, outside of an outbreak at Harbor Health Care in Ironton, announced on Aug. 6. “But the numbers are dropping.”

The county has seen 14 deaths from the virus, with the first reported on Aug. 13.

While the spread of the virus has slowed somewhat in recent weeks, the state remains under the emergency mask order and the medical community does not forsee a vaccine for the disease until early next year at the likeliest.

The majority of Lawrence County’s students returned to in-person classes this week, with some districts opting for remote learning or a blended system of in-person and at-home classes.