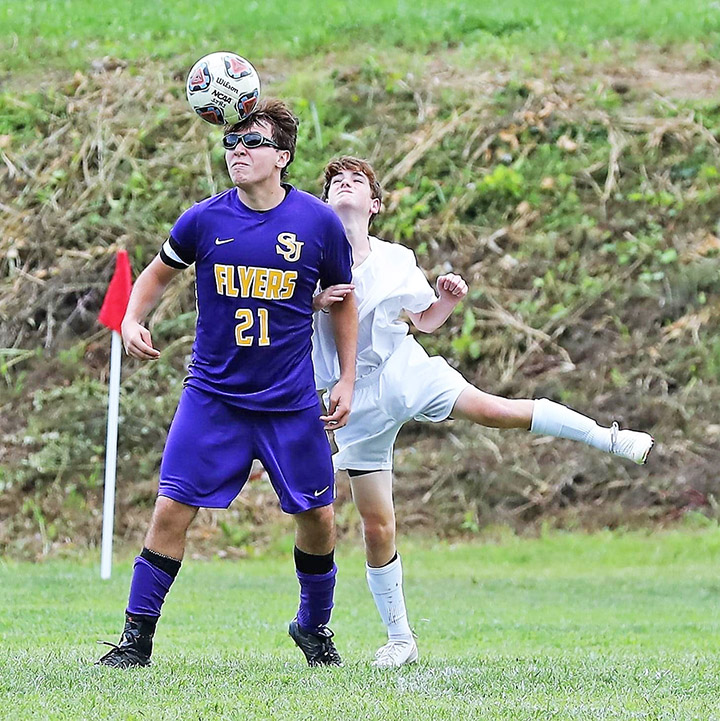 Three Dog Night once sang “One is the loneliest number.” For the St. Joseph Flyers, one was the only number last week.
The Flyers opened the soccer season with a 1-1 tie against the Lucasville Valley Indians on Thursday and followed that on Saturday with an 11-1 rout of the Chesapeake Panthers.
Against Valley, with 18:50 left in the half on Tuesday when rains stopped the game and the teams resumed play at that point on Thursday.
Bryce Balestra scored with 23:52 on the the first half clock to give the Flyers a 1-0 lead.
Austin Summers scored for the Indians with an assist from A.J. Johnson at the 9:15 mark to tie the game.
“This was a very good game. It was a high-tempo game,” said Flyers’ coach Mike Balestra.
“Both teams played hard and challenged for possession. Both teams played well being both our first game with no scrimmages.”
Jimmy Mahlmeister had 12 saves for the Flyers who had 20 shots with eight on goal. They had one offside penalty, eight fouls and five corner kicks.
Valley had 18 shots with 13 on goal, 11 fouls and one corner kick. Wesley Holbrook had seven saves for the Indians.
St. Joseph came back on Saturday and celebrate senior day with an easy win over the Panthers.
“Our team motto is to play hard, smart and together. That is what the Flyers did (Saturday),” said coach Balestra.
Bryce Balestra made his senior day memorable with a hat trick and an assist to go with the three goals.
Senior Jackson Rowe had two goals and an assist, senior goalkeeper Jimmy Mahlmeister had five saves and also got a goal and an assist.
Senior Jared Johnson had a goal while Michael Mahlmeister, Brady Medinger, Will Whaley and Elijah Rowe all had goals for the Flyers.
J. McKee had the Panthers’ goal.
St. Joseph took 33 shots with 22 on goal, two offside penalties, nine fouls and 12 corner kicks.
Chesapeake had nine shots with five on goal, one offside and seven fouls.
“This was to have this day with our seniors to celebrate their final soccer season. Most of these seniors have played soccer together since the third grade. They are a terrific group of young men and leaders,” said coach Balestra.
The Flyers host Portsmouth West on Tuesday.