Ironton, Gallipolis meet in yet another OVC showdown 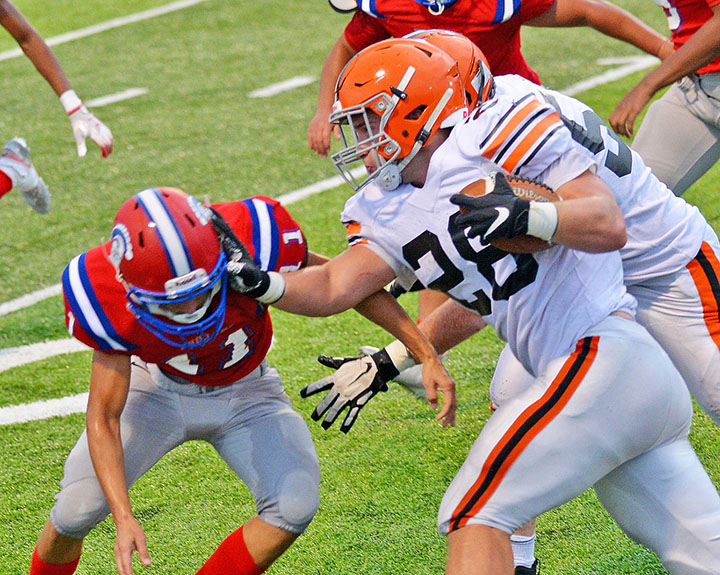 Ironton’s Reid Carrico (28) shoves a Portsmouth defender out of his path as he heads toward the end zone during last Friday’s 50-9 win over the Trojans. (Tony Shotsky/Southern Ohio Sports Photos)

Here we go again.
For the third straight season, the Ironton Fighting Tigers and Gallipolis Blue Devils will meet in what should decide the Ohio Valley Conference football championship.
Two years ago, the teams met at Ironton with Gallipolis rallying from a 26-9 deficit in the second half to win 36-33.
Last season, the two teams were unbeaten in the OVC again and held their showdown at Gallipolis.
There was plenty of excitement again but it was all on one side of the field as Ironton crushed the Blue Devils 52-0. It was the second most lopsided win in the series. The widest margin of victory came when Ironton won 72-0 in 1913.
Speaking of lopsided, Ironton won its opener 50-9 over Portsmouth in a game it led 50-3 at the half and then emptied its bench in the second half.
Gallipolis was up 41-0 against South Point when lightning hit just before the half and the teams eventually agreed to call the game at that point.
Ironton coach Trevon Pendleton sees a top team visiting Tanks Memorial Stadium on Friday.
“First of all, they are a very good football team and are a well-coached bunch of kids,” said Pendleton. “We have to play assignment football and get 11 guys to the ball carrier on every down.”
Some of the top players from the past two years are gone due to graduation, but there are a lot of players returning.
Gone for Ironton are defensive ends Seth Fosson and Junior Jones, quarterback and safety Gage Salyers, wide receiver and linebacker Jordan Grizzle and defensive back and wide receiver Collin Freeman.
But one key returning player is Ironton senior running back and linebacker Reid Carrico who has played in all three of the previous games including the showdown games the past two seasons.
Joining him from last are linemen Nate Cochran, Gunner Crawford, Dalton Crabtree, guard Matthew Davis, linebacker and fullback Cameron Deere, wide receivers and defensive backs Trent Hacker and Kyle Howell, center Rocky White and tackle Riley Boggs.
“Fortunately for us, I feel like our D-Line is as good as anyone in the state when they are playing the way they can. We are athletic and big. We have a lot of guys who have played a lot of snaps for us so I feel like that helps us out in every situation.”
Gallipolis isn’t without its top returning players.
One key player is running back and defensive back James Armstrong. The senior played in the game his first two seasons but missed last year with an injury.
Quarterback Noah Vanco is back along with receivers Briar Williams and Donevyn Woodson.
Running back Michael Beasy, linebacker Trent Johnson and linebacker Zack Hemby are back, but the biggest returning players are the trio of big linemen led by four-year starter Riley Starnes (6-6, 295) and joined by senor Yashua Peaks (6-4, 315) and sophomore Isaac Clary (6-7, 315).
“Having the Armstrong kid healthy makes them dangerous. He is a very good athlete who can take it the distance at any time,” said Pendleton. “Up front they have some big kids. If they are able to latch onto you, they can create some movement.”
One big difference this time is where the game falls on the schedule. In the past two years, the teams have met in week nine.
However, due to the COVID-19 and the OHSAA voting to have only six regular season games before the playoffs, the OVC schedule was revised so that the team’s rivalry games were played in the first week and then the most important games in the second week so that they would not face a possible cancellation at some point in the season.
Kickoff is 7 p.m. The game will be senior night for Ironton.
Since there is restricted seating for only 15 percent of stadium capacity, fans can listen to the game on WIRO-AM 1230 radio with the Voice of the Tigers Jason Philyaw.

Buckeyes’ DT Garrett out of hospital after being shot in face