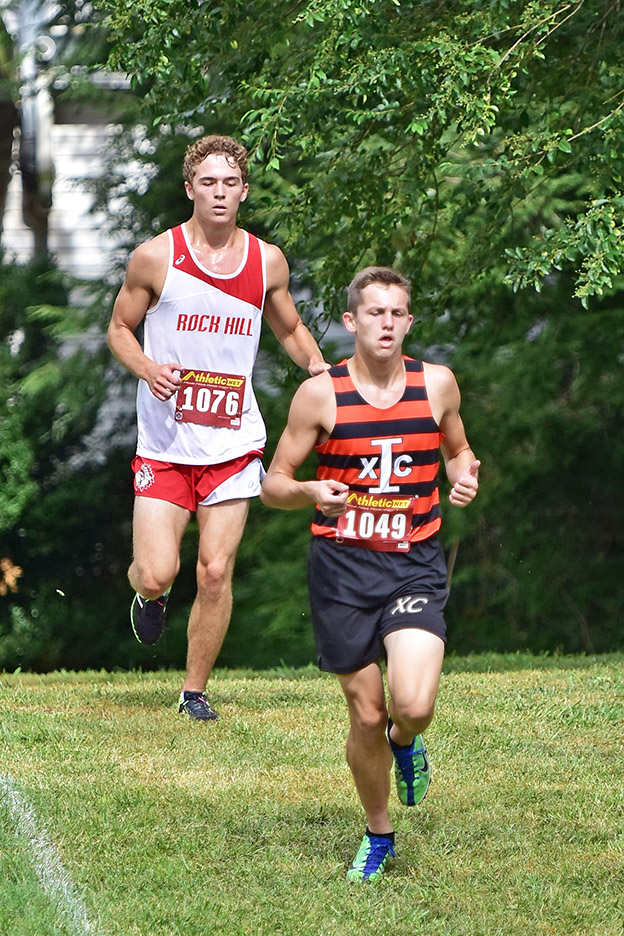 ROME — The course may have been a plush green, but everyone was seeing red.
The Rock Hill Redmen and Rock Hill Redwomen carried the red and white to the top of the standings once again as they won Ohio Valley Conference cross country meet championships on Saturday.
The Redmen won their sixth straight cross country championship while the Redwomen claimed their second straight team championship.
“Both teams have worked hard this summer. Even with the uncertainty of the season with everything going on, they continued to show up and run,” said Rock Hill coach Mark McFann.
“They were out for our open runs in June and July. They started practice on August 1 and were ready to go. We felt like they were prepared to make a good run at it again this year even if we ran the conference for our first meet.”
In the boys’ meet, Rock Hill had 34 points to finish ahead of the Coal Grove Hornets who had 76 points, the Fairland Dragons with 85, the Gallipolis Blue Devils 87, the Ironton Fighting Tigers 105 and Portsmouth Trojans 119.
Portsmouth’s Charlie Putnam was the overall individual winner as the freshman posted an 18:20.70 time. Putnam is the son of Eric Putnam who is the head track and cross country coach at Shawnee State and was the state runner-up when he ran for Chillicothe.
Ironton’s William Harrison finished second with a time of 19 minutes while Rock Hill’s Noah Wood was just 5.6 seconds behind to place third.
Rounding out the top 10 were Coal Grove’s Elijah Dillon at 20:05.9, Rock Hill’s Sam Simpson (20:28.1), Dylan Griffith (20:40.5) and Connor Blagg (20:44.7), Coal Grove’s Jeffrey Sparks (21:16.8) and Gallipolis’ Trisin Crisenbery (21:19.5).
In the girls’ meet, Rock Hill had only 24 points to claim the title. Gallipolis had 39 points, Fairland 70 and Ironton 97.
Sarah Watts of Gallipolis was the overall winner with a 21:19.5 clocking followed by Rock Hill’s Camryn Miller with a 22:19.4 time.
Laura Hamm of Coal Grove was third at 22:33.5 followed by Rock Hill’s Bella Stevens at 22:51, Coal Grove’s Kylee Thomas 23:33.9, Rock Hill’s Kylie Gilmore 23:37.4, Fairland’s Emma Marshall 24:24.5, Gallipolis’ Maddie Stewart 24:32.6, and Rock Hill’s Brianna Reynolds at 24:52 and Ashlie Howard 25:47.6.