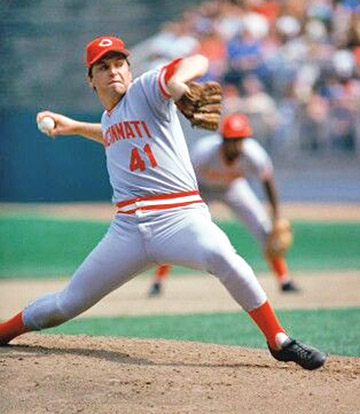 CINCINNATI —The Cincinnati Reds offer condolences to the family, friends and former teammates of Hall of Fame pitcher Tom Seaver, who died earlier today at age 75.
“Tom Seaver was one of the best and most inspirational pitchers to play the game,” said Reds Chief Executive Officer Bob Castellini.
“We are grateful that Tom’s Hall of Fame career included time with the Reds. We are proud to count his name among the greats in the Reds Hall of Fame. He will be missed.”
Seaver won 75 games for the Reds from 1978-1982 while accumulating a .620 winning percentage. He was a National League All-Star for the Reds in 1978 and 1981, and in a 4-0 win vs the Cardinals on July 16, 1978 he threw his only career no-hitter.
The 12-time All-Star won 3 Cy Young Awards and 3 ERA titles. He was enshrined in Cooperstown in 1992 and joined the Reds Hall of Fame, along with Tom Browning and Lee May, during induction ceremonies in 2006.

Ironton, Gallipolis meet in yet another OVC showdown

Ironton’s Reid Carrico (28) shoves a Portsmouth defender out of his path as he heads toward the end zone during... read more