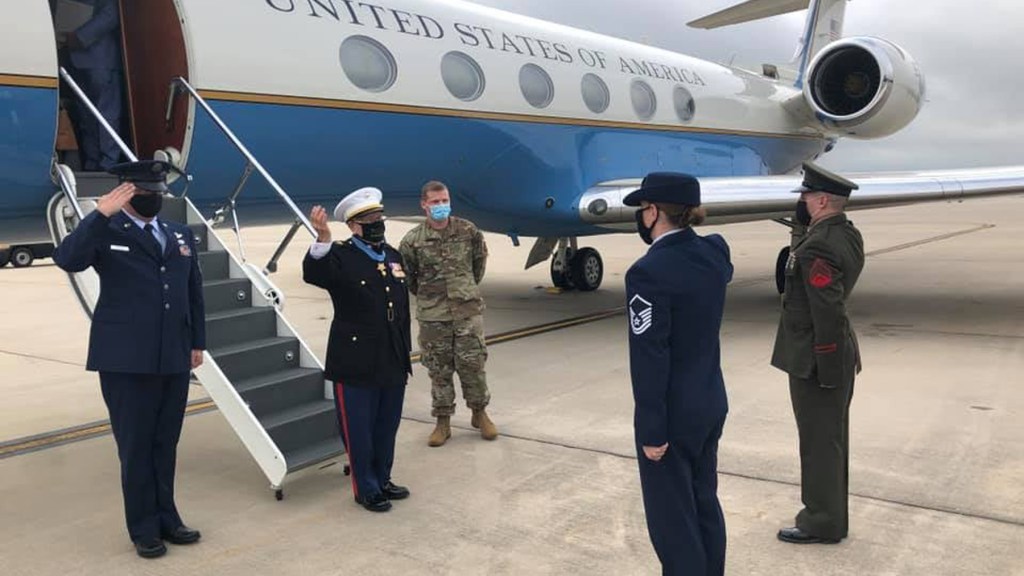 WASHINGTON, D.C. — On Wednesday, the nation officially marked the 75th anniversary of the end of World War II and a Tri-State resident accompanied President Donald Trump to the ceremonies.

Hershel “Woody” Williams, 96, of Ona, West Virginia, flew out of Tri-State Airport in Wayne County to Wilmington, North Carolina, where he met Trump for a ceremony designating the city as the nation’s first World War II Heritage City.

Wilmington received the honor due its history of shipbuilding during the conflict, as well its female aviation pioneers at Camp Davis.

Williams then flew with Trump aboard Air Force One to Washington, D.C. where he was to take part in a ceremony at the end of the day at the Iwo Jima Memorial.

The milestone observances were low key in most parts of the country, due to the COVID-19 pandemic, with veterans of the conflict being among those vulnerable to the virus. Virtual events took place in many cities.

There has been an effort in recent months, beginning with West Virginia’s Congressional delegation, to request that Trump award Williams the Medal of Freedom. Ohio Gov. Mike DeWine, the state’s two U.S. senators, Sherrod Brown and Rob Portman, and U.S. Representatives, including Bill Johnson, have all endorsed that effort. 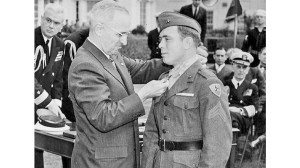 Japan surrendered to the Allies on Aug. 15, 1945, following the atomic bombings of Hiroshima and Nagasaki. V-J day is observed worldwide on that date, though the U.S. commemoration takes place on Sept. 2, marking the anniversary of the formal surrender.

Following the war’s end, Williams worked at the Veterans Administration hospital in Huntington, West Virginia, which has since been renamed in his honor, before retiring in 1969. In retirement ran a horse farm in Ona, West Virginia, while remaining active as an advocate for veterans.

His organization, the Hershel “Woody” Williams Foundation, has worked to erect memorials to Gold Star Families in most U.S. states and has raised funds for scholarships for Gold Star children.

On Oct. 2, which will be his 97th birthday, he will be on hand at the West Virginia state capitol for the dedication of a Gold Star Memorial adjacent to the state Veterans Memorial.

— Williams was one several World War II veterans in the Tri-State who were interviewed for The Tribune’s special coverage of the 75th anniversary of the war’s end. Read that interview here.