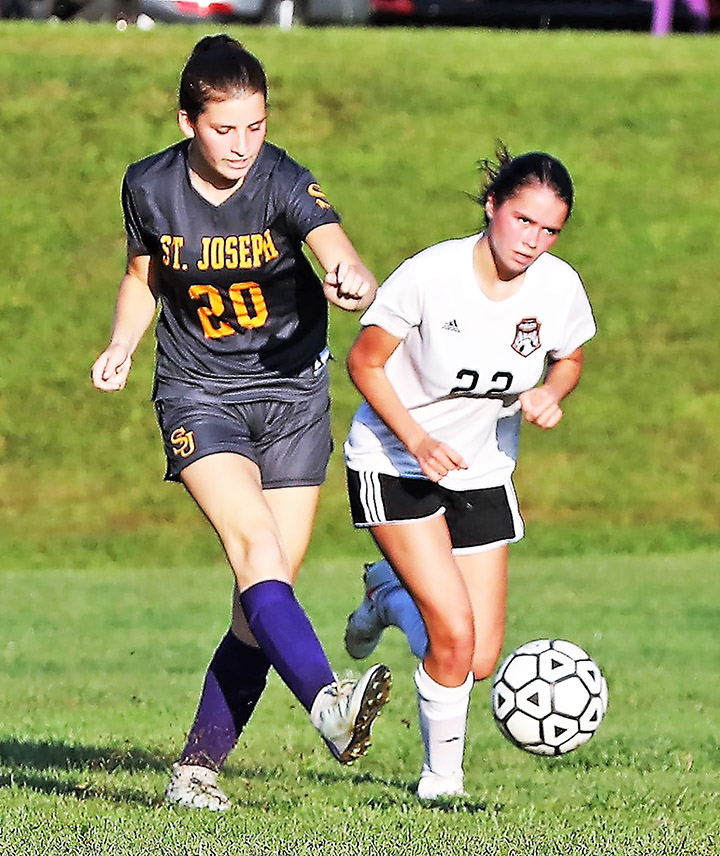 Rain gave the St. Joseph Lady Flyers some extra time off, but once the sun came out they really went to work.
The Lady Flyers opened the season at Waverly against not only a much larger school but a talented Lady Tigers team as they suffered a 10-3 loss.
Emma Whaley scored all three goals for St. Joseph as cousin Bella Whaley aided with two assists.
Freshman goalkeeper Riley Daniels posted nine saves.
“Waverly is an excellent team,” said Lady Flyers’ coach Dan Blair. “But there were many positives tot his game. One of the bright sports was our new goalkeeper Riley Daniels. Even though the score doesn’t suggest it, she had an excellent game.”
St. Joseph came back last Saturday as they celebrated senior day for Emilee Blankenship and Emma Whaley with a 15-0 win over the Chesapeake Lady Panthers.
“I can’t say enough about how proud I am of these two young ladies. They have both done great things on the pitch and in the classroom. They are true leaders,” said Blair.
Eight different players scored led by Emma Whaley with five goals, Bella Whaley three, Aubrey Sutton two and one each for Blankenship, Addie Philabaun, Lydia Sheridan, Laiden Unger and Laney Dressel.
Bella Whaley, Chloe Sheridan and Unger had two assists each with Philabaun, Sutton and Kerri Jenkins getting one each. Daniels had an easy game with one save and the Lady Flyers took 29 shots on goal.
Emma Whaley’s goals enabled her to become the school’s all-time leading scorer. She surpassed the old record of 76 by Lyndsey Booker and also the boys’ all-time leader Payton Blair who had 75. Whaley currently has 84 goals.
St. Joseph went to 2-1 on the season last Monday by rolling past the Portsmouth West Lady Senators 15-2.
The Lady Flyers took 33 shots on goal to just five for West. Daniels had two saves while the West goalkeepers combined for 11.
After West took a 1-0 lead on a goal by Jenkins, the Lady Flyers shook off their slow start and tied the game as Emma Whaley got a goal with an assist from Bella Whaley.
St. Joseph then took the lead for good as Unger scored and Emma Whaley had two more goals and Lydia Sheridan hammered one into the top corner with two minutes left in the half for a 6-1 lead.
Unger scored three minutes into the second half and then one minute later Philabaun scored with an assist from cousin Bella Whaley to start the onslaught.
Pfau scored as West interrupted the score run, but Chloe Sheridan, Emma Whaley, Unger, Philabaun, Sutton and Lydia Sheridan all scored to complete the Lady Flyers offensive effort.
Of the six St. Joseph assists, Emma Whaley and Sutton had two each with Phillabaun and Bella Whaley getting one each.
On Wednesday, the Lady Flyers played the always tough Wheelersburg Lady Pirates and battled hard only to lose 3-0.
“We couldn’t seem to get the offense started in this one, but you have to give credit to the Pirates midfield for keeping the ball on their end of the field,” said Blair.
Laney Eller scored at the 21:23 mark for the only first half goal.
Eller scored within the first minute of the second half for a 2-0 lead and then got her third goal with 17:04 on the clock.
St. Joseph had only six shots to 21 for Wheelersburg.
Daniels had another big game with 13 saves. Wheelersburg’s Brynley Preston had three saves.
St. Joseph plays at Northwest Saturday at 6:30 p.m.