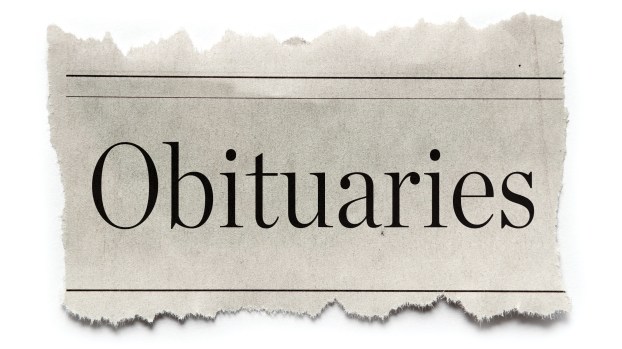 He was born June 12, 1935, in Waterloo, son of the late Pete Worley and Gladys Marie Vanderhoof Worley.

He was also preceded in death by a sister and brother-in-law, Betty and Gilbert Owens. He was retired from the City of Ironton as a floodwall and street department superintendent.

Richard was a member of St. Paul Lutheran Church. He had a passion for his family and for farming.

Graveside services will be held at noon on Wednesday, at Aid Cemetery, Aid. Burial will follow in the cemetery. Slack and Wallace Funeral Home, South Point is assisting the family with arrangements.

He was also preceded in death by his wife, Gwen Bowles Rowe, who passed away Nov. 4, 2010.

Carl was a 1946 graduate of Ashland High School and was a United States Marine Corps veteran, serving in World War II.

After returning from the war, Carl went to work at Armco Steel as a crane operator and retired in 1991.

Carl was a part of the Phillips Funeral Home family, where he spent many years working as a funeral attendant.

Carl enjoyed helping other and was well known for donating blood, he was proud that he was able to donate over 188 units (or 25 gallons) over his lifetime. Carl also enjoyed bluegrass and country music and dancing.

In addition to his parents and wife, he was preceded in death by a sister, Janet Wileman.

Donations may be made in Carl’s name to Shrine’s Hospital for Children Medical Center, 110 Conn Terrace, Lexington, KY 40508.

Paul was born on Sept. 26, 1954, for Eileen and Laramar Karnap in Ironton. He graduated with a degree in finance from Franklin University and had a successful career as a financial planner.

He enjoyed nature walks and taking frequent long walks with his beloved Rottweilers.

Paul married to Jacki Auble Karnap in 1979. He is survived by a brother, Fred, and a sister, Kathy.

In lieu of flowers, donations may be made to the American Cancer Society.

A private memorial service will be held to celebrate Paul’s life at a later date.

A U.S. Army veteran, he graduated with the Symmes Valley Class of 1973.

Graveside services will be held at 11 a.m. on Saturday at Locust Grove Cemetery, with Rev. Roger Mooney officiating and graveside rites by the Veterans of Foreign Wars.

Wilma McFarland, of Ironton, went to be with the Lord on Sept. 4, 2020, at King’s Daughters Medical Center.

Wilma was born July 23, 1940, the daughter of the late Dorothy and Leslie McDowell.

She is survived by her husband, Rodney McFarland, whom she married on Aug. 1, 1958.

Wilma was a graduate of Ashland High School and a former employee for Forth’s FoodFair, Coal Grove, and was an Avon representative.

A celebration of life will be held at a later date.

She was a longtime member of Trinity Assembly of God in Coal Grove, did short-term missions and regularly studied the Bible.

Lois also proudly served her country in the Marine Corps during the Korean conflict.

In addition to her parents, she was preceded in death by her husband, John (Andy); and two brothers, William and Donald.

She is survived by her daughter, Stephanie (Chris) Neff, of Portsmouth; two sons, John (Mary) Anderson, of Gig Harbor, Washington, Michael Anderson, of Jacksonville, North Carolina. She counted Chris Neff as a true son, and called Mary, her “daughter in love” and best friend.

Family and friends will gather for a memorial service at a later date, due to the current 2020 COVID-19 pandemic.

Wolfe- Nelson Funeral Home in Sciotoville is handling the arrangements.

Fond memories and condolences may be sent to www.WolfeNelsonFuneraHome.com.

She is survived by her husband, Jerry Norris.

Funeral services will be held at 1 p.m. Friday at Slack and Wallace Funeral Home, South Point, with Pastor Terry Wagner officiating. Burial will follow at Greenlawn Cemetery, Burlington. Friends may call one hour prior to the service at the funeral home.

Funeral service will be 2 p.m. Thursday at Phillips Funeral Home, 1004 S. Seventh St., Ironton, with Pastor Jeremy Sherrill officiating. Burial will follow in Woodland Cemetery and visitation will be Thursday from 1 p.m. until time of the service at the funeral home.

No services will be held.

Memorial service will be 4 p.m. Monday, Sept. 14, 2020 at Phillips Funeral Home, 1004 S. Seventh St. Ironton, with Pastor Terry Wagner officiating. Visitation will be 3 p.m. until time of the service at the funeral home.

At the request of the family, if you would like to make a donation, it may be made to Phillips Funeral Home, PO Box 122, Ironton, Ohio 45638 to help with final expenses.

Funeral service will be 2 p.m. Wednesday at Phillips Funeral Home, 1004 S. Seventh St., Ironton. Burial will follow at Myrtle Ridge cemetery. Visitation for family and friends will be 1 p.m. Wednesday until time of the service at the funeral home.

Kathy was born Feb. 24, 1953, in Lawrence County, a daughter of the late Howard Gene and Mary (Layne) Markel.

She is survived by her husband of 49 years Walter Ray Depriest, whom she married June 11, 1971.

Kathy was a 1971 graduate of Rock Hill High School and was a homemaker.

She was a faithful member of Mt. Calvary Freewill Baptist Church, where she played the piano and sang. She would often sing as a duo with her husband, Walter Ray.

She enjoyed sewing, canning and cooking.

Her greatest love was her family, especially beating the grandkids in horseshoes, and just getting to spend time with them.

In addition to her parents, she was preceded in death by grandparents, Millard F. Layne and Myrtle Evelyn Depriest Layne; and Charlie and Tora Dalton Markel

Funeral service will be 1 p.m. Friday at Phillips Funeral Home, 1004 S. Seventh St., Ironton, with Brother Brandon DePriest and Brother Dave Schug officiating. Burial will follow in Mud Hollow Cemetery, 371 Township Road 41-N, Pedro. Visitation for family and friends will be Friday, 11 a.m. until time of the service at the funeral home.

Ina was a 1960 graduate of South Point, where she was a cheerleader.

Ina was a secretary for Terreo Office Machine Service for several years.

In addition to her parents, Ina was preceded in death by a son, Billy Darling.

Funeral service will be 12:30 p.m. at the Tracy Brammer-Monroe Funeral Home, 518 S. Sixth St., Ironton, with Pastor Gerald Ferguson officiating. Visitation will be Thursday 11 a.m. until the time of the service. Burial to follow at Woodland Cemetery.

“The American Labor Movement has consistently demonstrated its devotion to the public interest. It is, and has been, good for... read more