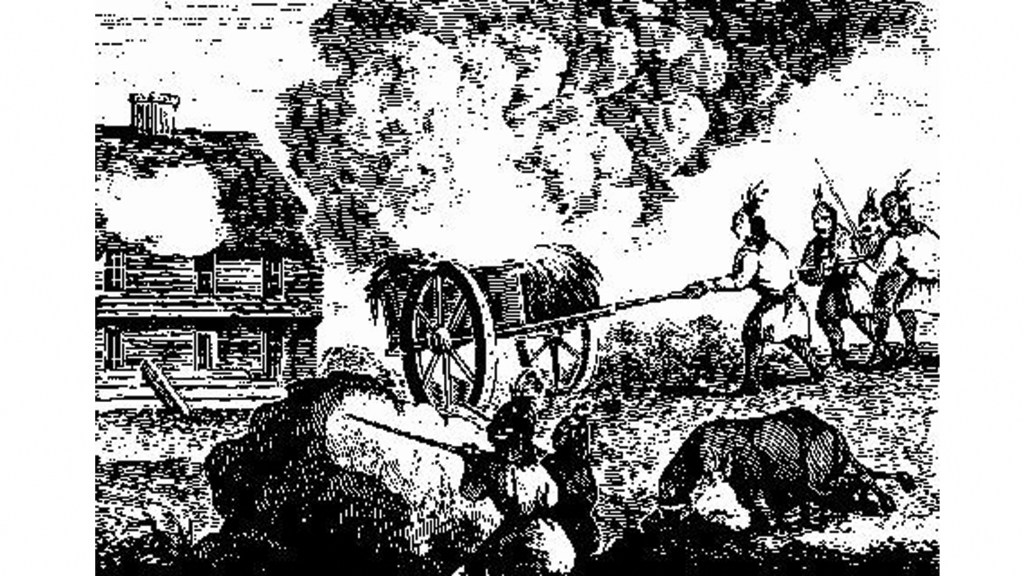 This 1800s engraving, “Indians Attacking a Garrison House,” is believed to be a depiction of the Native American assault on the Haynes Garrison, in Sudbury, Massachusetts on April 21, 1676. (Public domain) 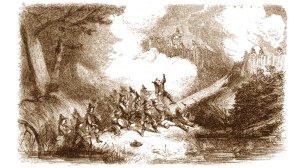 This 1857 engraving from Harper’s Magazine depicts the colonial assault on the Metacomet’s fort in the Great Swamp Fight in December 1675. (Public domain)

Between 40,000 and 20,000 years ago, small bands of Asian people left extreme northeastern Siberia and came to northwestern Alaska.

These people were the first known residents of the “New World.” They crossed frozen ice sheets by sled, or walked across a land bridge or maneuvered their way in skin boats to the “tail of Alaska.”

We think the distance they traveled was between 50-55 miles. Today, their travel route is underwater and is covered by the Vitus Bering Strait. These people probably were following the animal herds they hunted. Eventually, they would “people” North, Central and South America.

In selecting specific areas of the Americas for their residences, certain groups developed distinct languages that would serve as a basis for tribal classification — hundreds of tribes!

The Vikings or Norsemen came to North America between 1000 and 1003 A.D. They were the first people from the Old World to develop relations with the natives in the Newfoundland area.

The Vikings called the natives “skrellings,” or dwarfs, and unfriendly attitudes developed between the two groups. The Vikings’ travel to North America made no change in the balance of nature and left no trace on Native American folklore.

The Vikings struggled against starvation, the climate was too cold and was getting worse, and the Inuit people they confronted were quite belligerent.

Constant contact between these New World natives and Europeans began with Christopher Columbus and his voyages westward from Spain. These Asian emigrants had lived in the Americas, with the exception of the Norse intrusion, for thousands of years before the Europeans came to claim new lands.

Columbus had a nautical philosophy called the “Enterprise of the Indies.” Not knowing the American landmass existed, he felt if he sailed directly west, he would find the East Indies and their riches. “His” East Indies corresponded with that area now referring to China, Japan, India and the islands of the East Indies themselves.

He thought this island to be an outpost of the East Indies. Believing that the crew was very close to Japan and the East Indies he dreamed of, Columbus called the natives “Indians.” They were Arawaks and were gentle and very peaceful.

These Arawaks used tobacco. Columbus never touched North America or today’s United States, but he did name the inhabitants of the New World “Indians.” There have been suggestions that historians dismiss the name “Indians” and use the terms Native Americans or “Amerinds” instead.

Following this 1492 landfall, other European nations sent voyages to the New World. France, England, Portugal, the Netherlands, Sweden and Russia would come to the New World to fish, trade or colonize. They would have to interact with the Indians.

As Europeans settled the eastern coast of North America, they would eventually move westward, pushing the Indians farther west on to other tribes. Most New World Indians showed the colonists how to survive in this new land. It was only a matter of time until some of the Indians would resist the “white westward wave.”

English colonists wanted ownership of the land and it took about 20 times as much land to support an Indian as to feed one Englishman.

When and where would Indian resistance to European expansion begin? Those Indians in New England never understood the European concept of land ownership. The Indians thought they would share their New England lands with the white colonists.

In receiving axes, cooking kettles, coats, ball and powder and colorful beads and trinkets, the Indians thought they had rented the lands, not sold them! Many Indians felt the Earth was their “Mother” and the Sun, their “Father.” The Indians asked the colonists many times, “Would you sell your Mother?”

By 1675, a war of extermination broke out in New England. There had been nearly 40 years of peace with the New England Indians. The three main tribes that brought on the war were the Wampanoags, Narragansetts and Nipmucs. The main figures in this Indian resistance were Wamsutta and Metacom, songs of Massasoit who had aided the Pilgrims of Plymouth colony in the early 1620s.

Massasoit had asked the colonial legislature of Plymouth colony to give English names to his two oldest sons. Referring to Ancient Macedonian history, Wamsutta was named Alexander and Metacom was called King Philip. On the death of Chief Massasoit in 1661, Wamsutta, or Alexander, became chief of the Wampanoags. These two sons of Massasoit did not share their father’s trust of the English.

The Plymouth colony fathers demanded that Alexander appear in Plymouth to prove his loyalty to the English. Alexander said no, but he was forced to appear. On Alexander’s return to his tribe, he died after contracting a fever. His 24-year-old brother, King Philip, claimed that an English doctor had poisoned his brother. King Philip promised vengeance and hid his hatred for the English for 13 years.

King Philip’s War broke out in June 1675. King Philip had a taste for colorful clothing and ran up bills in Boston shops. The only way to pay these bills was to sell parcels of Wampanoag land. Cattle from Plymouth colony destroyed Indian cornfields. Philip was angered that bootleggers sold alcohol to the Wampanoags.

The immediate cause of the war was the murder of John Sassamon, a Harvard-educated Indian who had been King Philip’s personal secretary. Sassamon was accused of telling Plymouth’s governor of Philip’s conspiracy against Plymouth.

Sassamon, known as a “praying Indian” and very skilled in the English language, was found dead beneath the ice in a pond near the colony. The colonial coroner ruled Sassamon had been murdered, but some colonists believed the bruises around his neck were due to the ice he may have fallen through.

The Plymouth officials took three Wampanoag men to court, charged them with murder and hanged them. Two of the three claimed innocence and the third accused Philip of the murder. Philip felt the colony of Plymouth had no business hanging three Wampanoag Indians. Fearing additional loss of Wampanoag land, seeking revenge for his brother’s death and angry over the three hangings, Philip started his war on June 24, 1675, by attacking Swansea, a settlement near King Philip’s headquarters.

When the war broke out, there were about 40,000 whites in New England. There were 20,000 Indians, but not all of them would join Philip in his war of extermination.

The Indians would burn every dwelling, barn or mill and kill the livestock. If the colonial forces went after the Indians and ventured too far into the woods, the colonists were ambushed and slaughtered.

No outside help came from England or other colonies at first. Bounties were offered for Indian heads and captured Indians were sold into slavery in the West Indies. Three thousand Indians would die in King Philip’s War while one-tenth of the total white male population in Massachusetts perished.

On Dec. 19, 1675, a thousand men led by Gov. Jasiah Winslow of Plymouth moved through a snowstorm to attack allies of King Philip and the 3,500 Narragansetts who were inside their fort near Kingston, Rhode Island.

A carpenter, Benjamin Church, led 30 men through an unfinished wall of the Indian fort. The Narragansetts began to retreat. This “Great Swamp Fight” resulted in 300 warriors and 300 women and children being killed. This was the first military success the colonists had in this war. In retaliation, other New England tribes ravaged the frontier towns. In July 1676, Benjamin Church captured Philip’s wife and nine-year-old son. Massachusetts ministers advised that the two be sold into slavery in Bermuda. Philip was heartbroken!

On Aug. 11, 1676, an Indian named Alderman approached Benjamin Church and offered to lead him to the place where King Philip was hiding. Alderman’s brother advised Philip to make peace with the English. Enraged, Philip sank a tomahawk into the man’s head. Thus, the man’s brother, Alderman, set in motion a plan of betrayal. Those Indians closest to King Philip believed an Indian prophecy that Philip would never die at English hands. Alderman led Church and his Indian allies to Philip’s camp.

When the shooting began, most of the Wampanoags ran. Philip grabbed his gun and ran toward a swamp. One Wampanoag ran toward a man named Caleb Cook to kill him. Cook’s gun misfired, but Alderman shot the Indian twice — once through the heart. It was King Philip!

This war was but the opening round of a conflict between whites and Native Americans that would continue “off and on” for two centuries — until it ended at Wounded Knee Creek in South Dakota in 1890.

New England might have perished if King Philip had formed an effective Indian coalition. Philip was one of the first chiefs to resist the white westward movement, but he would not be the last.

Philip’s head was displayed on a pole in Plymouth for 25 years. His body was quartered and hung in four trees. Alderman took Philip’s hands, put it in a bucket of rum, and exhibited it for money.

— Bob Leith is a retied history professor from Ohio University Southern and The University of Rio Grande.