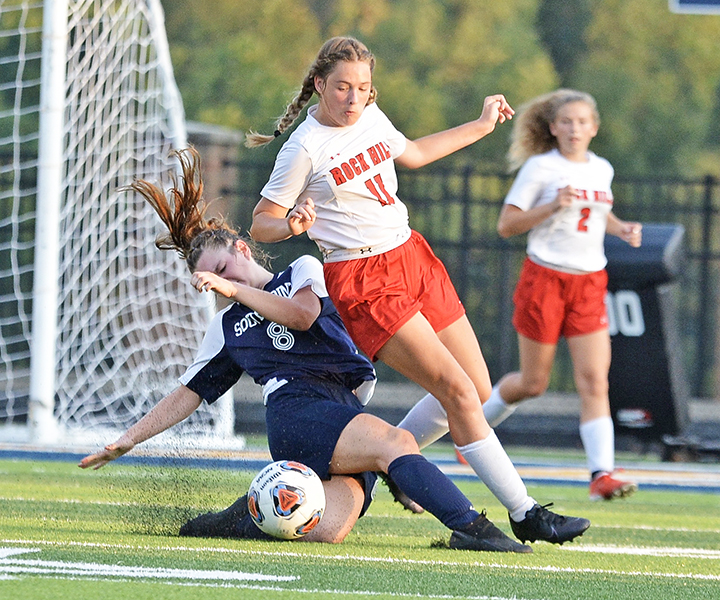 SOUTH POINT — It was a big game, so the implications were big as well.
In a key Ohio Valley Conference soccer game, the Rock Hill Redwomen earned a hard-fought win over the South Point Lady Pointers, 2-1.
“That was a big win for us. Our girls played hard and they had to battle the whole game,” said Rock Hill coach Summer Collins.
“South Point is a much-improved team from the first time we played them. They have a lot of speed on their team. It was a very intense game.”
With the win, Rock Hill is now 5-0 overall and 4-0 in the league.
Rock Hill took a 1-0 lead at the 21-minute mark of the first half on a free kick by Bri Reynolds.
The game remained that way until the 30-minute mark of the second half as Ellen Heaberlin scored off an assist from Kennedy Waldrop to put Rock Hill up 2-0.
Three minutes later, South Point scored on a goal by Elaysia Wilburn and it was 2-1.
But neither team scored the rest of the game as Rock Hill got the win.
Goalkeeper Kate Delong had seven saves for the Redwomen.
Rock Hill hosts Gallipolis at 6 p.m. Tuesday.
Rock Hill 1 1 = 2
South Point 0 1 = 1
First Half
RH – Bri Reynolds (free kick) 21:00
Second Half
RH– Ellen Heaberlin (assist by Kennedy Waldrop) 30:00
SP – Elaysia Wilburn (unassisted) 33:00
Saves – RH: Kate Delong 7; SP: Whitney Mckenzie

Ready or not, Burrow era to begin

CINCINNATI (AP) — On the other side of Ohio, Joe Burrow’s parents are trying to arrange a way to watch... read more