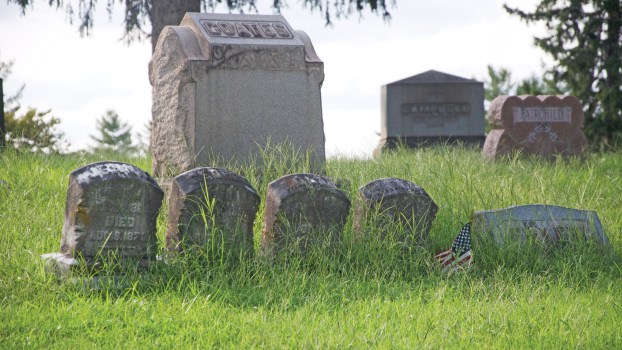 Tall grass covers several headstones at Woodland Cemetery on Monday. Visitors have expressed concern about high grass and the upkeep of the historic cemetery in recent months. (The Ironton Tribune | Heath Harrison)

Concerns raised on upkeep at cemetery

Tall grass and upkeep at Woodland Cemetery have been the subject of concerns this summer, with several visitors voicing their disapproval on Facebook.

A few people, visiting family members’ graves, have contacted the Ironton Tribune to express their disapproval with the state of the historic cemetery.

A visit to the grounds on Monday found some plots maintained and recently cut, while many, including the historic section 7, which has some of the oldest graves in the cemetery, had high grass obscuring headstones and markers.

At the recent Ironton City Council meeting on Sept. 10, the subject of the tall grass came up.

Councilman Chris Haney said that he has gotten a bunch of calls about grass at the cemetery, which the council doesn’t have any authority over.

Bob Cleary is on the city council’s representative on the board of trustees and he was asked if he had any information about the situation for the public.

“I have been up there personally trying to figure it out,” Cleary said. “I know they brought in a new crew and they have made headway on it.”

He said there will be a trustee meeting at 5:15 p.m. on Thursday. 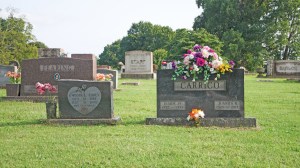 Some sections of Woodland Cemetery appeared maintained on Monday. Visitors have expressed concern about high grass and the upkeep of the historic cemetery in recent months. (The Ironton Tribune | Heath Harrison)

Cleary asked council’s attorney Mack Anderson about whether the city had any obligation to help fund the cemetery and its operations. Cleary said the cemetery is its own entity and the city has never funded it, but he expected questions about it to come up in the future.

Anderson said that the cemetery is a joint township-city cemetery under state law.

The city council and the Upper Township Trustees each have a representative on the cemetery trustee board.

“That board is a separate governmental entity that totally controls the cemetery and makes the rules on how much graves cost or how much it costs to close a grave or open a grave and those kind of things,” Anderson said. “It is supposed to be self-sufficient.

He said there is no legal obligation for the city or the township to donate money to the cemetery board. The cemetery has a perpetual care fund, which is supposed to draw interest for the upkeep of the cemetery.

Upper Township has a seat on the Woodland board.

“We have brought Woodland from running in the red and losing money, back into the black,” McDaniels said. “That has been no easy task.” 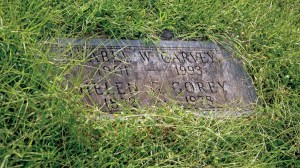 The grave of famed illustrator Edward Gorey and his mother, Helen Gorey, is obscured by tall grass at Woodland Cemetery on Monday. Visitors have expressed concern about the upkeep of the historic cemetery in recent months. (The Ironton Tribune | Heath Harrison)

McDaniels said the grass has gotten “out of control” this summer due to understaffing.

“We have four employees to cover 135 acres with maintenance and doing burials,” he said. “In these extremely trying times, they are trying to do the same great job with less money and with less employees.”

He said the board had felt is was best to put prioritize on burial needs.

“Obviously, the grass took a back seat,” he said. “This became a problem for them to do both with their limited resources. They have addressed the problem and plan to not let this happen again.”

McDaniels said citizens in Ironton have volunteered to help with cutting and weeding.

“So we will get it back in shape very soon and humbly apologize to any family that has been offended by it’s condition,” McDaniels said.

“Please be patient with those employees and give them time to correct it. We can all work together to overcome any challenge and I applaud the citizens who have stepped up to help!! Thank you.”