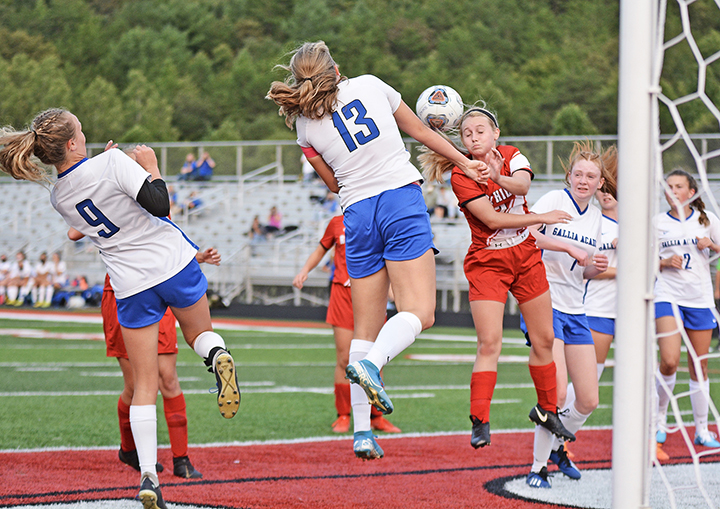 PEDRO — Even when the Rock Hill Redwomen don’t play their best, they still play pretty well.
Rock Hill was locked in a defensive battle on Tuesday as they tied the Gallipolis Blue Angels 1-1 in an Ohio Valley Conference soccer game.
“We didn’t play our best, but I’m still proud of the girls. We still played hard the whole game,” said Redwomen coach Summer Collins.
“Of course, we wanted to get the win, but even with the tie we still haven’t lost in the conference so we still control our own destiny.”
Aleigha Matney returned to the Rock Hill lineup after an injury sidelined her a week ago and she did have a good game with 15 saves.
Brooklyn Hill had eight saves for Gallipolis.
Rock Hill (5-0-1, 4-0-1 OVC) scored first with 11:37 left in the first half when Kennedy Waldrop made a goal with an assist from Bri Reynolds.
Gallipolis came back to tie the game less than a minute later as Preslee Reed scored an unassisted goal at the 10:50 mark.
Rock Hill plays Northwest at 1:30 p.m. on Saturday.
Gallipolis 1 0 = 1
Rock Hill 1 0 = 1
First Half
RH – Kennedy Waldrop (assist Bri Reynolds) 11:37
Ga – Preslee Reed (unassisted) 10:50
Saves – RH: Aleigha Matney 15; Gallia: Brooklyn Hill 8