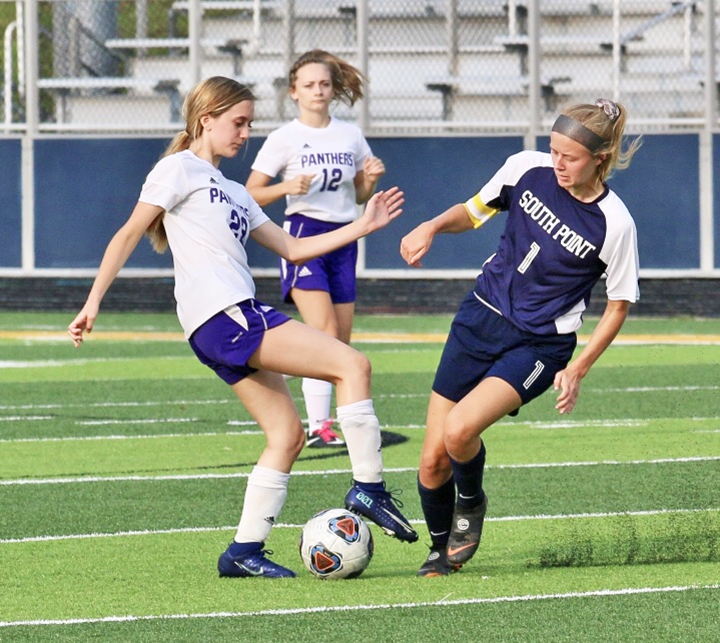 SOUTH POINT — It was time to step up or step back.
After losing 2-1 at Fairland on Tuesday, the South Point Lady Pointers’ coach Erin Jenkins was looking to see how her team would respond.
Very nicely, thank you.
The Lady Pointers bounced back with a 10-0 Ohio Valley Conference soccer win over the Chesapeake Lady Panthers on Thursday.
“My girls came out ready to play tonight after a heartbreaking loss at Fairland on Tuesday. The girls were feeling very down from out game because they didn’t feel like the score reflected how well we played,” said Jankins.
Kylee Ellison led the way with a hat-trick as she scored three goals. Ellison also had three assists.
“Tonight, we were able to get the ball rolling offensively and put Tuesday behind us. Kylee, Keilanee and Elaysia were able to find the back of the net several times while my defense held Chesapeake only two shots on goal,” said Jenkins. “My defense was led by Jaycie Walters and Bridgette Aylsworth tonight.”
Filling the next with two goals each were Elaysia Wilburn and Kailanee Montgomery while Jaycie Walters, Bridgette Aylsworth and Whitney McKenzie had one goal each. Bridget Hern added an assist.
As the Lady Pointers’ goalkeeper, McKenzie had five saves to key the shutout.
South Point plays at Greenup County, Ky., on Tuesday at 7:30 p.m.
Chesapeake 0 0 = 0
South Point 4 6 = 10