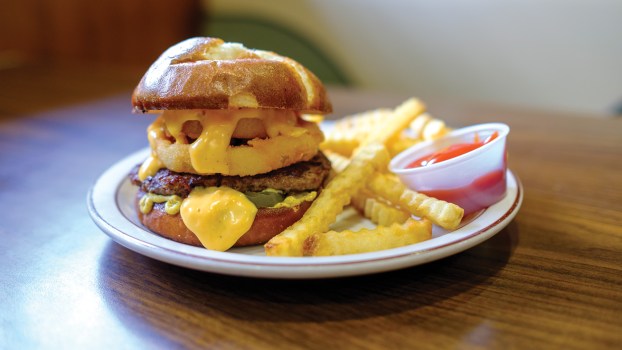 Frisch’s Big Boy has only been on Ninth Street in Ironton since 2014 but it’s held a special place in the minds of residents long before the restaurant chain returned to town six years ago. Change is a common theme for any business in 2020 but Big Boy has found a way to adapt by looking to the past.

While the drive thru was a necessity for many restaurants during the lockdown earlier this year, Big Boy combined that with old-time car hop service that proved a hit. After Gov. Mike DeWine loosened the restrictions on businesses, the restaurant hasn’t had to rely upon the car-hop service but still offers the service.

With a steady increase of customers choosing to dine-in since the state lifted the strongest restrictions, Frisch’s has brought back their beloved breakfast bar served from 8 a.m.-8 p.m. on Wednesdays and from open until 2 p.m. on Saturdays and Sundays.

For safety reasons, an employee is on standby to tend to the bar and serve customers.

However, the drive thru remains the most popular mode of customers getting their Frisch’s fix according to assistant manager Erin Wetzel,

“The dinning room hasn’t been as busy as normal but the drive-thru has been busy enough to balance out things,” she said.

Even in 2020, some changes can be good. A great example of this is Big Boy’s new cheeseburger: The Fat Tire beer cheese burger. As described on the menu, “Our new exciting twist on our famous Big Boy. Our beef patty is smothered in hot Fat Tire beer cheese, topped with crunchy onion rings and placed between a fresh pretzel bun.”

Along with the new burger, there is an appetizer sampler featuring some items usually exclusive to the hot bar. The sampler offers great variety including fried pickles, fried mushrooms, mozzarella sticks and chicken wings. Of particular note are the chicken wings which were previously available on the hot bar for Mondays but proved so popular they were moved to the main menu as both a standalone appetizer and as part of the sampler.

As with the return of fall, Frisch’s popular pumpkin pie is back along with a new twist on the autumn staple: pumpkin pancakes.

While already offering a pumpkin flavored twist in the form of the pumpkin cheesecake, the pumpkin pancakes bring a new fall flavor to the familiar breakfast item.

For information visit them on Facebook at Frisch’s Big Boy of Ironton or in-person at 301 S. Ninth St. in Ironton.