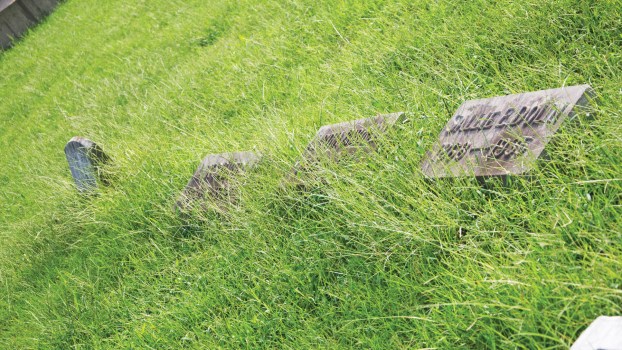 Tall grass covers several graves at Woodland Cemetery on Monday. Visitors have expressed concern about high grass and the upkeep of the historic cemetery in recent months. (The Ironton Tribune | Heath Harrison)

After initially only letting in five people at a time at their Thursday meeting, the Woodland Cemetery Trustees came outside the cemetery’s brick office to talk to the 20 or so people who had gathered with concerns about the grass needing mowed.

Craig Thomas, the Upper Township Trustee on the cemetery board, apologized for the way it looks. His parents, grandparents and his brother are all buried in the cemetery.

“We are going to try and not let it happen again,” Thomas said. “That is all we can do.”

Trustee-at-Large Joe Mason explained that they have a crew of five that works on mowing the 135-acre property, as well as cutting the weeds around 6,000 headstones and mausoleums. The crew works Monday through Saturday, so, sometimes, there are days when there are just four working.

He said that they hit a patch of heavy rain over the past month, which made it difficult for the crews to keep up.

“We have one employee who has worked here for over 30 years. And, for as long as he can remember, we have had a period or two when things get out of hand,” Mason said, adding, even at home, there are points where you don’t have to mow your lawn for a week or two and then there are periods when it rains and you need to mow twice a week.

“When it rains, it becomes very difficult,” Mason said. “The week before Labor Day, we had four days of rain. And we also average three burials a week. That week, we buried nine people.”

When a funeral is underway, crews don’t mow, so as not to be loud during the proceedings.

The trustees said they are looking at how they can improve things, such as possibly mowing far away from funerals that are being held and maybe scheduling crews to work later in the day, when funerals aren’t being held. They also might see if people who have to do community service could help out.

One switch will be in the veteran’s section and the Civil War section. The veterans section is owned by Lawrence County Veterans

Service and they have had a contract with the cemetery since the 1920s to mow the 3.5-acre section.

Thomas Williams, Gerard Lambert and Marsha Lambert with Lawrence County Veterans Service went to the meeting to talk to the cemetery trustees. The veterans service has hired a veteran-owned cutting company to mow the grass in the veterans and Civil War areas.

“They aren’t getting it done, so our board has hired a mowing company. It’s veteran-owned and has veteran employees,” Williams said, adding that the company is not from Ohio, but they are looking to get a veteran-owned Ohio mowing company to do the work next year. “We are going to pay to get it done, because we have been getting complaints and it doesn’t look right to see a veterans’ section look like that. We do not like that.”

“They deserve better than what they have been getting,” said Gerard Lambert. “We shouldn’t have to do this because of the contract they signed back in 1921. But reality is reality. Someone is going to have to do it. We got the OK from the county commissioners to do this for the veterans’ plots.”

The cemetery trustees were fine with that situation.

“That is going to be a be a big help,” Mason said. “We think it is fantastic.”

Over the last year, the cemetery board has made cuts since there have been less burials.

They let one employee go and have cut expenses where they could.

“We used to have about 250 burials a year. Now we now have about 150,” Mason said, adding the community is shrinking and incomes are shrinking and that has led to more people choosing cremation.

“We would have been out of money in 12 months, so we put the brakes on. We economized some. We renegotiated contracts for a lot of things,” Mason said. “Now, we are making money instead of losing money.”

The cemetery does have a perpetual care fund, but the organization only uses the interest on the fund and doesn’t tap into the $1 million fund itself because the money has to last even after the cemetery no longer has graves available.

Residents hope to inspire others