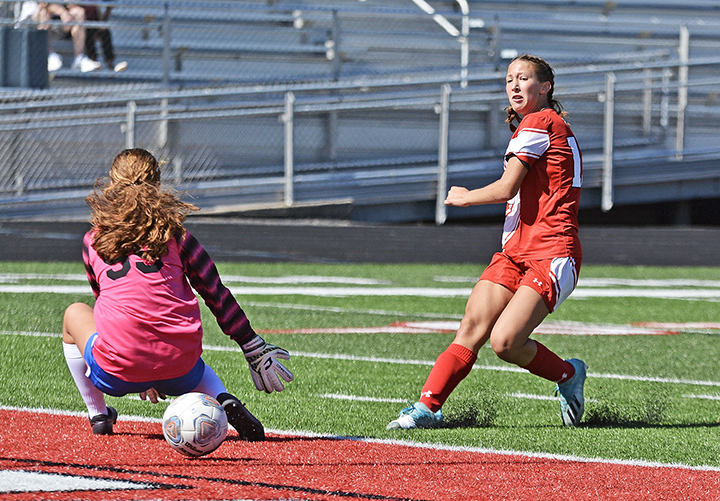 PEDRO — There is currently a radio advertisement talking about how a person will always remember that first time they voted.
If you’re the Rock Hill Redwomen, you’ll remember the first time you played the Northwest Lady Mohawks in soccer.
The Redwomen created a fond memory on Saturday as they blanked the Lady Mohawks 5-0.
“This is the first time we’ve played Northwest and they’re a pretty solid team. We just played really well,” said Redwomen coach Summer Collins.
One of the more memorable things for Rock Hill was the defensive effort that did not allow Northwest to get a single shot on goal in producing the shutout.
The biggest offensive memory will belong to Bri Reynolds who came up with a hat-trick as she scored three goals — all in the second half.
Rock Hill got two first half goals as Emmi Stevens scored with an assist from Reynolds and then Ellen Heaberlin scored on a free kick.
In the second half, Reynolds scored two unassisted goals and then a final goal with an assist from Ashlie Howard that completed the hat-trick.
Rock Hill — now 6-0-1 on the season — visits Minford for a 7:30 p.m. game on Monday and host Greenup County, Ky., at 6 p.m. on Tuesday.