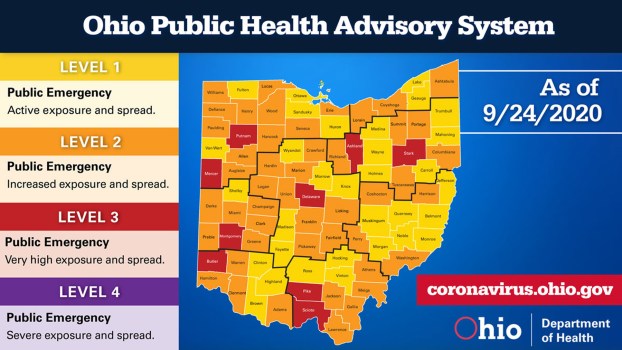 Scioto back to Red on COVID-19 alert map 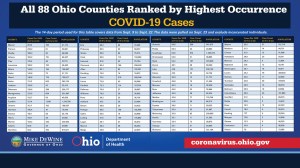 COLUMBUS — The alert level for Scioto County has been elevated by the Ohio Department of Health on its latest COVID-19 map.

The county was among five that were raised to Red Level Three on the latest update on Thursday.

Gov. Mike DeWine, who unveiled the new map at his news conference on Thursday, said the distribution of COVID-19 cases has “shifted from large urban areas to medium/small counties, and interestingly, our counties that border IN, KY and WV are almost exclusively red and orange.”

“The population of Ohioans living in yellow counties has decreased during the past four weeks indicating that we have significant spread of the virus across the state,” DeWine said.

This brings the total of counties at Level Three Red to nine. No counties were listed at the highest designation on the four-tier system, Purple Level Four.

Both Lawrence and Scioto counties were listed at the Level Three designation for a few weeks earlier this summer before reverting to Level Two.

Earlier this week, DeWine released information for the Ohio Department of Health, which ranked counties by highest occurrence of cases.

DeWine also announced on Thursday that he is now recommending that all residential colleges and universities regularly test a sample population of their asymptomatic students.

“Some schools are already doing this,” he said. “Screening asymptomatic students really gives college presidents and their staff an idea of the spread on their campuses. Our expectation is that each campus plan to screen at least 3 percent of their at-risk population.”