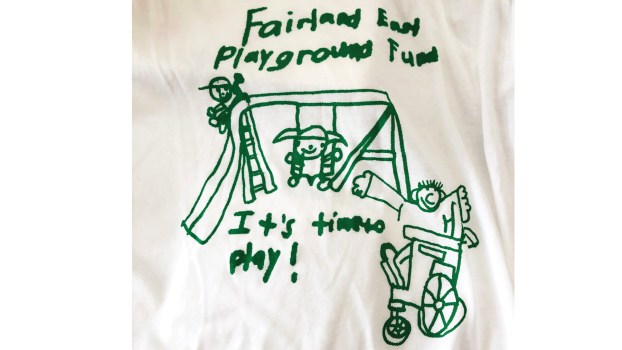 Will raise funds for new playground at elementary school

ROME TOWNSHIP — Xander Byrd, a 10-year-old fifth grader at Fairland West Elementary School, was the winner of the Fairland East Playground Fund’s T-shirt design competition.
The FEPF contest took place this summer and organizers said it helped get students excited and engaged about the playground project.

Byrd’s winning entry received 269 votes in the online contest, far outpacing the other 13 contestants. His design was printed on a T-shirt that is being sold as a fundraiser for the playground and he received a free t-shirt for his winning entry.

“We are so proud of Xander’s work and proud to wear these shirts to promote our cause,” Allison Ferguson, president of FEPF, said. “Because our playground is based on a student-centered design, we felt strongly that we should have a student design the t-shirt for our fundraiser. His design is so reflective of what we want the playground to be. We want it to be safe, inclusive, and fun for everyone. We also want to thank all of the participants and everyone who took the time to vote. We had some really fantastic designs. We’re so proud of our youngest Dragons and our community coming together to support this project. We have a long road to go but we’ve had tremendous support so far.”

Byrd, who said winning the contest surprised him, likes to draw and only recently began to get more serious about it. He’s draws most every day and was happy for the chance to draw something to help with the new playground.

“I really have been drawing a lot this summer,” he said. “I draw a lot of things, but my favorite is Minecraft stuff.”

Participants were asked to include FEPF and the group’s slogan “It’s Time To Play” into their design. The rest was left to their imaginations.

Byrd was thoughtful in his approach.

“Me and my mom decided on it because I want it (the playground) to be something that everybody can play on,” he said.

Anyone interested in purchasing a shirt can do so on the FEPF website at https://fairlandeastplaygroundfund.weebly.com by clicking on the “Donate & Shop” tab and then choosing the “Fundraiser Tshirt” option.

FEPF will be involved in two other upcoming fundraisers next week. The group will be participating in the Dragon Nation Vendor Fair from 9 a.m.-4 p.m. on Saturday, Oct. 3 at the Lawrence County Fairground. Additionally, FEPF will host a Pick-up Picnic for the Playground event from noon-2 p.m. Sunday, Oct. 4, also at the Lawrence County Fairground. Drive thru meals of beef brisket, green beans, cornbread and dessert will be available for $12 if pre-ordered on the website or $15 the day of until sold out. The meal will be packaged in to-go containers and delivered to your car window.