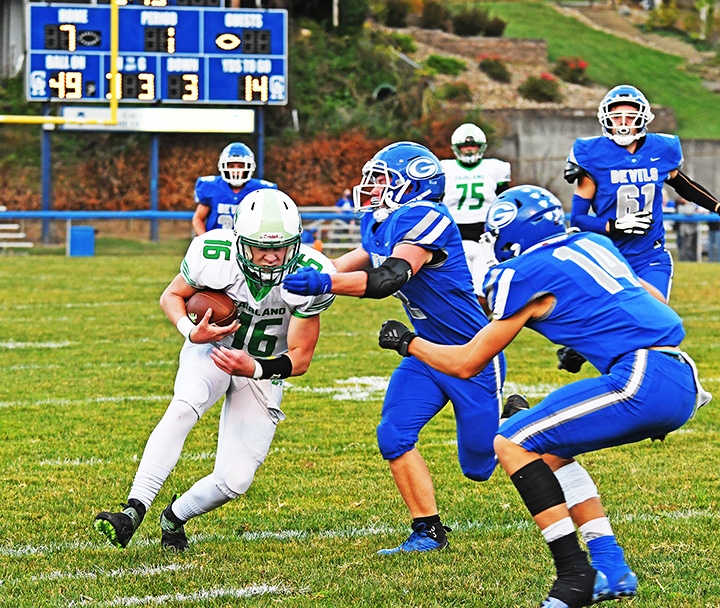 Fairland Dragons’ quarterback Max Ward (16) scrambles for some yardage during Friday’s game at Gallipolis. The Ohio Valley Conference showdown was won by Gallipolis in a comeback, 47-43. (Courtesy of Scott Slone)

GALLIPOLIS — “You know, before the season, whether (people) thought we should play football or shouldn’t play football, tonight is why we should,” said Gallipolis coach Alex Penrod Friday night after his team narrowly defeated the visiting Fairland Dragons at Memorial Stadium, 47-43.
The loss was the first of the season for the Dragons who are 4-1 overall and in the Ohio Valley Conference.
The Blue Devils got the first punch with a 63-yard touchdown run on the second play of the game by James Armstrong to take an early 7-0 lead.
But the Dragons would then take over the first quarter with back to back touchdown passes from quarterback Max Ward.
Fairland would lead going into the second quarter 16-7 after being successful on a pair of two-point conversions. J.D. Brumfield then pushed his way in for another Dragon touchdown from 10 yards out to make it 23-7.
Gallia (4-1, 3-1) then tugged back on the rope in this tug of war matchup, and scored 2 unanswered touchdowns to make it 23-22 with just under a minute and a half until halftime.
Fairland coach Melvin Cunningham then dug into his bag of tricks and chose the old fashioned hook and ladder play and the Dragons ran it to perfection.
Quarterback Max Ward hit Tevin Taylor who then pitched it to Steeler Leep who ran it in for a touchdown as time expired to give them a 30-22 lead at the break.
Leep wasn’t finished, however, as he returned the second half kickoff 54 yards and Brumfield did the rest with a 10-yard touchdown to push the lead to 37-22.
The Blue Devils answered with a 56-yard touchdown pass from Noah Vanco to Briar Williams and then forced a turnover to give them the ball back late in the third quarter.
Armstrong broke off another long one for 53 yards this time and get Gallia within a point entering the fourth quarter, 37-36.
“This shows exactly the importance of what high school football brings,” added Penrod, “It’s really more than a game. It teaches these kids how to handle adversity and builds character.”
The fourth quarter would be full of adversity as both teams found themselves in a dog fight.
Armstrong started things out in the fourth quarter when he returned a Dragons punt for a 65-yard touchdown and their first lead of the game since the first Gallia touchdown of the game, 42-37.
The adversity got worse for Fairland when they sent a snap over the head of the punter for a safety and trailed by 7.
The Blue Devils’ defense answered the call again and held Fairland to a punt and would get a 26-yard field goal from Caleb Geiser.
Fairland patched things up and got in the end zone one more time with a 21-yard touchdown pass from Ward to Gavin Hunt to make it the final, 47-43.

3 injured by box cutter during fight on Ohio State campus

COLUMBUS (AP) — A fight on the campus of Ohio State University ended with three students being injured by a... read more