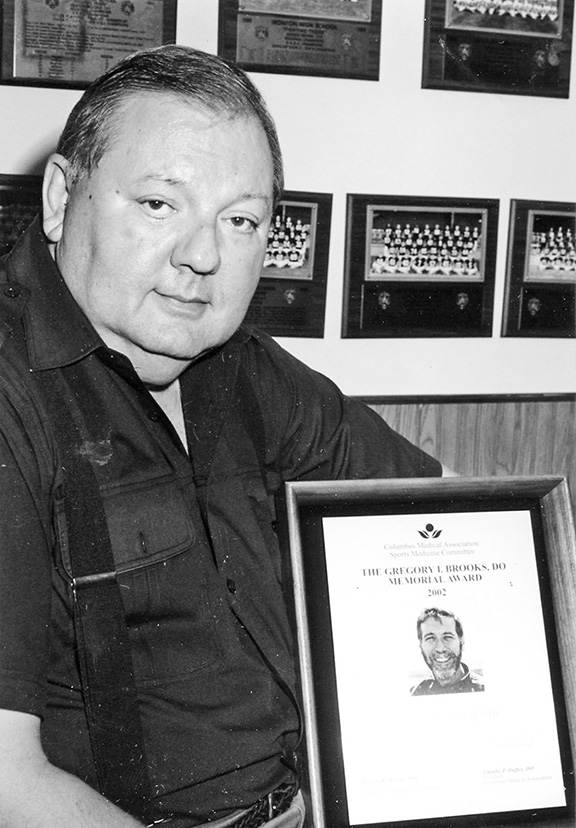 Dr. John Leach displays his Dr. Gregory Brooks Memorial Award while sitting in his office amidst the walls decorated with Ironton Fighting Tigers’ football team plaques from his days as the team physician. (Photo Submitted)

Ironton has lost a legend and, more importantly, a good man and a great fan.
Dr. John Leach, an outstanding athlete and successful surgeon, died Wednesday in Florida.
Leach was an All-Ohio quarterback for the Ironton Fighting Tigers who graduated in 1957. He signed a scholarship to play for the University of Cincinnati. He also played basketball at Ironton.
After his playing career, Leach began a career as an orthopedic surgeon and eventually was considered one of the finest knee surgeons in the country.
Leach returned to Ironton after medical school and opened a practice while doing surgeries at Lawrence County Hospital. He also began doing surgeries at Riverside Hospital in Columbus and later moved his offices to the city.
While in Ironton, Leach began working as the Ironton High School team physician along with Dr. John Dole.
“John was a good guy and he came from a good family. I loved his parents. His brother and sister were good people,” said former Ironton athletic director and coach Mike Burcham.
“John was three or four years ahead of me in school. I saw him play. He was a good athlete.”
Leach still served as the Ironton team physician for 34 years. Although he worked in Columbus, he drove to Ironton and all over the state to attend the Fighting Tigers’ football games.
Additionally, Leach served also served as the team physician for Ohio University and Otterbein College.
“He took care of hundreds of Ironton kids and people from the town. When we had an injury, the kids didn’t come to (head coach Bob) Lutz or me, they just went to see John. And whatever he said, we did,” said Burcham.
“And he loved Ironton.”
Everyone knew when Leach was in town by the license plates on his car that read “Tigr Dr.”
Although he had four or five waiting rooms at his practice in Columbus, his office had three walls covered with Ironton football team plaques from each season whenever the Fighting Tigers made the playoffs and however far they advance.
He never missed a game home or away despite living in Columbus. He always made the trip with Dr. Jim Billard who continued coming to Ironton games after Leach retired and moved to Florida.
“He never charged us a dime. He did physicals for free. If someone needed a surgery, he took care of it quickly,” said Burcham.
“And he was just down to earth. He talked to us and the players and his patients the same way. He never talked down to anyone and he was honest with everyone. He was just a super guy.”
Leach was named to the Ohio High School Athletic Association Physicians Hall of Fame and was the recipient of the Columbus area’s Dr. Gregory Brooks Award presented during ceremonies at the Buckeye Hall of Fame and was the 2004 recipient of the prestigious Dr. Thomas A. Brady Community Service given annual to orthopedic doctors who are instrumental in improving the care of high school athletes.
The award was presented in Quebec, Canada. He was nominated by Columbus physician Randy Wroble.
Leach was the 1985 Ironton Sports Day honoree and was inducted into the Ironton High School Athletic Hall of Fame in 2015.