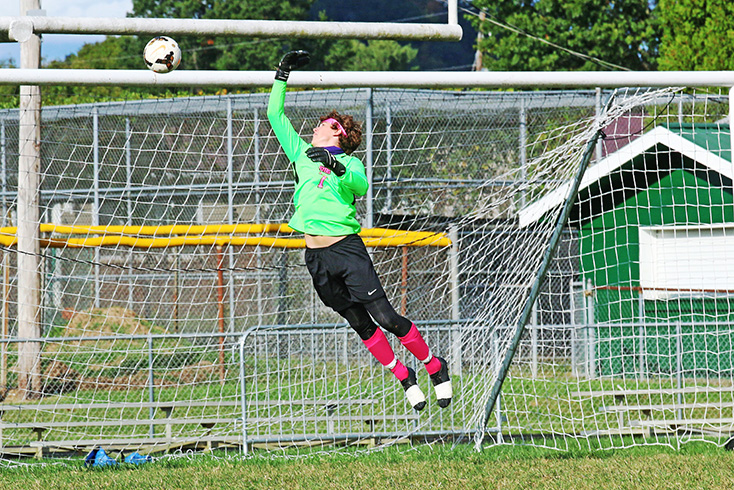 St. Joseph Flyers’ senior goalkeeper Jimmy Mahlmeister bats a shot up and over the net for a save during a recent game. The Flyers beat West Union 10-1 on Monday as Mahlmeister got nine saves and he is now the program’s all-time saves leader with 503. (Photo By Tim Gearhart)

WEST UNION — It’s been quite a year for Jimmy Mahlmeister and it’s not even close to being over.
The St. Joseph Flyers’ senior goalkeeper came into Monday’s soccer game against the West Union Dragons with 494 saves and trailing Joey Bush who was the leader at 501.
Mahlmister went out and registered nine saves as he set a new school record at 503 as the Flyers routed the Dragons 10-1.
Bush played for the Flyers from 2013-16.
The record comes on the heels of Friday night when — as the Ironton Fighting Tigers’ placekicker — he boomed a 42-yard field goal in his first attempt of the season. Until this fall, Mahlmeister had never ever tried being a football placekicker.
But there was a lot more going on for the Flyers than just Mahlmeister and the record.
Jackson Rowe, Jared Johnson and Brady Medinger scored two goals each for the Flyers while Zachary Johnson, Elijah Rowe, Andrew White and Will Whaley all scored one goal.
Bryce Balaestra had an outstanding game with six assists. Others getting assists for the Flyers were Elijah Rowe, Jackson Rowe and Mahlmeister.
West Union got its lone goal on a penalty kick by Cameron Campbell.
The Flyers had 31 shots with 19 on goal, four fouls, one offside penalty and six corner kicks.
West Union had 17 shots, 10 on goal, three fouls and two corner kicks. Dragons’ goalkeeper Braxton Blanton had nine saves.
St. Joseph (10-0-1, 3-0-1) plays Lucasville Valley on Tuesday in a battle for first place in the Southern Ohio Conference.