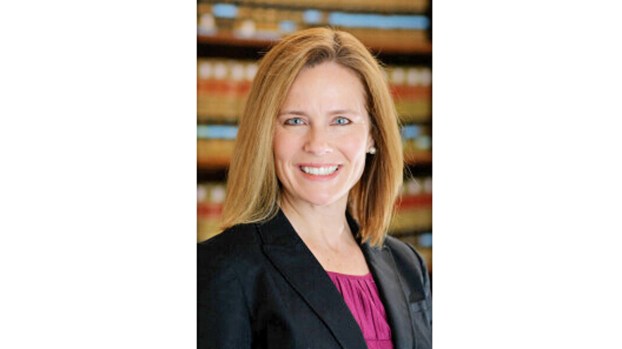 The vacancy on the U.S. Supreme Court has brought political controversy to the Senate, which is the legislative body that has to confirm people to certain positions in the government. The position came open after the death of Justice Ruth Bader Ginsburg who died on Sept. 18 at age 87 from pancreatic cancer.

She served on the court for 27 years was after being appointed in 1993 by President Bill Clinton.

While Trump is pushing for quick confirmation of Barrett, Joe Biden, his Democratic competitor in the upcoming general election asked the Senate to hold off on the vote until after the Nov. 3 election to “let the people decide.”

According to reports from the Associated Press, Biden said if Trump wins the election, the president’s nominee should have a vote. But Biden said he should choose the next justice if he prevails on Nov. 3.

“This is time to de-escalate,” Biden said Sunday in Wilmington, Delaware.

No justice has ever been confirmed to the Supreme Court so close to a presidential election with early voting already underway in some states. Republicans believe the fight ahead will boost voter enthusiasm for Trump and Senate Republicans at serious risk of losing their majority. Democrats warn Barrett’s confirmation would almost certainly undo Americans’ health care protections as the high court takes up a case against the Affordable Care Act in the fall.

According to a national poll by The New York Times and Siena College that was released Sunday, a clear majority — 56 percent — of voters believes the winner of the Nov. 3 presidential election should fill Ginsburg’s seat, versus 41 percent who said Trump should as the current president.

Biden has said he would nominate the first black woman to the court, but he has not released the names of his potential choices.

“I look forward to considering the nomination of Judge Barrett to serve as the next Associate Justice of the Supreme Court of the United States,” Portman said. “Judge Barrett was confirmed by the Senate on Oct. 31, 2017 for her current role as a judge on the U.S. Court of Appeals for the Seventh Circuit.
Portman said the job of a Supreme Court justice is to fairly and impartially apply the law and to protect our rights guaranteed by the Constitution, not to advance public policy goals by legislating from the bench.

“Judge Barrett has an impressive background and is highly regarded for her work as a judge and as a constitutional law professor at Notre Dame,” he said. “I look forward to meeting with her in the coming weeks as she goes through a fair and thorough evaluation process.”

On Saturday, DeWine issued a press release in support of Barrett.

“As president of the United States, President Trump has the constitutional obligation to put forward a U.S. Supreme Court nominee, and I applaud his selection of Judge Amy Coney Barrett, who is both highly qualified and highly respected,” he said. “In addition to her distinguished judicial career, Judge Coney Barrett is a mother of seven, a constitutional scholar, and an esteemed law professor.

“Judge Coney Barrett’s prior writings and judicial opinions show that she will interpret the law fairly and impartially, and I urge the U.S. Senate to act quickly to confirm her nomination.”
Ohio’s Democratic senator, Sherrod Brown, was not as supportive of the nomination of Barrett, calling it a power grab and that the Senate shouldn’t vote on it until after the presidential inauguration in January.

“Americans are already voting, and they deserve to have a say on the court that will decide the fate of their health care, workplace safety, criminal justice reform and civil rights,” he said. “It’s clear that this is a power grab by President Trump and Mitch McConnell. Further, I have serious concerns about some of Judge Amy Coney Barrett’s rulings against women’s rights, civil rights and consumer rights.

Brown said he is planning to review her record thoroughly before he makes a decision.

“Mitch McConnell and Donald Trump should do their jobs to help Americans struggling amid a pandemic instead of moving heaven and earth to install a justice that will put American’s health care and fundamental civil rights in danger,” Brown added.