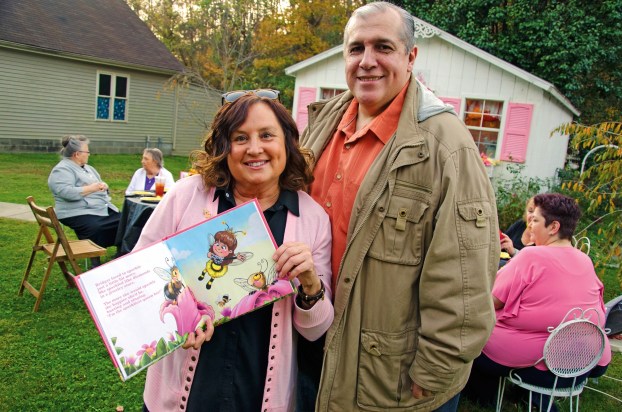 Drawing from the personalities of those closest to her, an Ironton woman has been dreaming up fairy tales to teach important lessons of life.

Author Vicki Roach finished her first book early in 2019 and, since then, she  has written three more of the Christian-based books for children.

Partnered on each with illustrator Ricardo Ramirez Gallo, who also lives in Lawrence County, she has self-published the works through Proving Press and received a positive reception, with packed signings and events around the release of each.

“My first three books were based on true life events turned into fairy tales,” Roach said of the works, which are based on family members and teach life lessons.

Roch and Gallo’s partnership began with “Fairies Love Oreos,” about her daughter Breana.

She said the message of that book was “about forgiveness and angels are all around us when you least expect them.”

It was obvious the work connected with a local audience when she hosted her first signing at the Briggs Lawrence County Public Library and attendees lined up a good half hour before the start of the colorful, fairy and flower-themed event.

She followed that up later in the year with “Bridget the Queen Bumblebee,” about her other daughter, Bridget, who she said she always referred to with the nickname “Queen Bee.”

“This book teaches how giving and sharing can be a blessing to others,” Roach said. “Sometimes, in life, you’re not always treated fair, but you should still share.”

After the two books about her daughters were released, Roach’s next work, “Gingerbread Smash,” was based on her sons, Bruce and Brice, and came out in the 2019 holiday season.

“It teaches the true meaning of Christmas,” she said.

When she’s not writing, Roach runs the Tea Party Treats & Sweets Cottage and Cowboy Cabin on Township Road 32, just off Route 93, though, the venue’s business for children’s parties has been temporarily closed due to the COVID-19 pandemic and limits on mass gatherings.

Roach said her goal is to write two books a year, and she has just finished her latest, “Momma Fox,” based on her mother.

“I was raised in Pedro in a little hollow called Fox Hollow,” she said. “Our mother taught us all about God’s love. She was the one who introduced us to church and kindness.”

Roach said her mother is a breast cancer survivor and portions of this book’s earnings will be donated to local charities for women who have breast cancer and need things such as wigs and prostheses.

“I wanted to do something to honor her,” Roach said,

She said her goal is to have another book by the end of the year.

“There are more in the works,” she said, adding that the next one, a panda-themed book, will center around one of her grandsons.

She is quick to share credit for the success of the tales with her illustrator.

“Without illustration, a story is just words,” she said of Gallo’s contributions. “He’s amazing and brings the stories to life.”

The books are available through Amazon and Barnes and Noble’s websites and more information on the works can be found at www.vickiroach.com.

“I was always encouraged as a child to use my imagination, and it was always OK to believe in magical fairy tales,” Roach says in her biography on her website. “Life was and is a big, beautiful place of enchanting, and surprising moments.”

CHESAPEAKE — It’s been almost five years since Dick Gilpin served as mayor of Chesapeake, but he is still deeply... read more