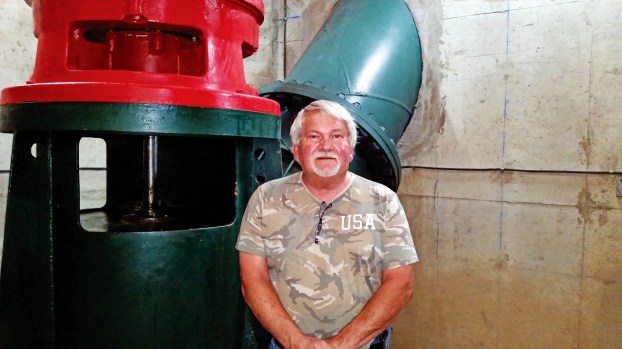 Mike Pemberton, superintendent of the City of Ironton’s Flood Control Department, stands in the front of the flood control pumps. He has worked for the city for over three decades in various departments. (The Ironton Tribune | Mark Shaffer)

GENERATIONS: Keeping the city going – Pemberton is over much of Ironton’s infrastructure

For three decades, Mike Pemberton has been helping to keep Ironton’s infrastructure going.

As the superintendent of the Flood Control Department, he and his staff do their best to keep the 1940s pumps and other flood devices operational.

He got a job with the City of Ironton in the Flood Control Department because it was a good job.

“I had a wife and family to support,” he said. “But I got interested in serving the public.”

Pemberton has had a couple of different positions within the city.

“I was the city service man for a couple years. Then I moved on up the ladder to city mechanic. Then I was offered a supervisor job over Flood Control, Sanitation and the Street Department in 1990 and I’ve held that position since then,” he said. “With all the duties in the sanitation department and flood protection for the residents, I’ve really enjoyed being a public servant.”

Which is a good thing, especially during flood season when the department has to monitor the level of the Ohio River and make sure the 80-year-old flood control systems are working so sections of Ironton don’t flood.

“We are out here all hours of the night whenever that river comes up,” Pemberton said. The normal level of the river is around 32 feet. “It just takes a couple feet of water and then we’ve got to take action — get these pump stations in action, closing some big sluice gates to keep the river water from coming into our system. That is a challenge sometimes.”

Plus, the flood department has five miles of earthen levies that they have to try to keep mowed.

And department has to go through yearly inspections with the U.S. Corp of Engineers on the flood system for the Rehabilitation and Inspection Program (RIP).  As long as the city qualifies for the RIP program, if there is damage to the city’s flood defense system during a flood, the city can apply to receive federal assistance to repair it.

“If you get off the RIP Program and something happens, it comes out of the  city’s pocket,” Pemberton said. “If you stay in it, the federal government will pay for 100 percent of the damage.”

As for what is the most difficult part of working in three departments, Pemberton said it just depends.

“I don’t dread any of it, not really,” he said. “If a resident has a complaint we are there to help them. We try to do all our best to keep all the garbage picked up. We haul probably, every day, 20 tons of garbage out of Ironton, five days a week.”

As for the street department, they are responsible for patching holes and keeping alleys clear.

“We just got a new grader, so that makes life easier,” Pemberton said.

The street department does get to do some fun things, like at Christmas time.

“We are in charge of decorations and lighting,” he said. “That always makes the city pretty.”

Pemberton said there are a lot of responsibilities but he enjoys it all.

“It’s been a good life for me, I enjoy working for the city. I enjoy serving the public.” Pemberton said.

He added he will probably being retiring in the next couple of years.

“But I would like to see a few more projects completed before I go,” Pemberton said.

Katie Savage, owner of Counter Culture, said the courses they offer are a fun workout and inspire confidence. (The Ironton... read more