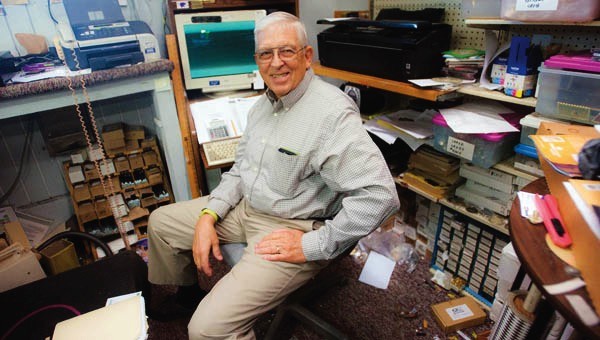 Dick Gilpin, who served as mayor of Chesapeake from 2008-2016, has operated Gilpin’s Creative Trophies in the village since 1998. (The Ironton Tribune | Jessica St. James)

CHESAPEAKE — It’s been almost five years since Dick Gilpin served as mayor of Chesapeake, but he is still deeply involved with his community.

He has been operating Gilpin’s Creative Trophies, located at 101 2nd Ave. in Chesapeake, since 1998.

“We had the hardware store, which we obtained in 1982,” he said of the business, Gilpin’s True Value, which he ran for 16 years. “Then when the hardware was producing income, we had an opportunity to purchase the trophy business next door.”

He said the business’s clients include schools and sports teams, as well as churches.

“We provide awards for sports and for the end of the year,” he said, noting the demand comes seasonally.

Gilpin, who was born in Cheboygan, Michigan, said he did not meet his dad, who was serving in World War II, until he was a year and half old and he returned to go back to work on the railroad.

The family lived in several places, such as Tiffin, Detroit and Columbus.

Gilpin graduated from the Ohio State University and went into the Army for four years, deployed to Korea and Vietnam.

From there, he went to Madison, West Virginia, where he acquired a store and ran it for nine years, until he and his father acquired the hardware store in Chesapeake in 1982.

He served as Chesapeake’s mayor from 2008-2016, and recalls his biggest accomplishments as financing two retaining walls and working with the state.

“And we paved some streets,” he said.

Gilpin and his wife, of 52 years, Marla, have four children.

Gilpin is also a member of the Lawrence County Republican Party’s central committee and served last year as interim county auditor when Jason Stephens resigned the position to take a seat in the Ohio House.

One son, Bryan, is director of communications for Hospice of Huntington, while another, Todd, is an independent filmmaker. A daughter, Carrie Dixon, works for Lawrence County Common Pleas Judge Christen Finley, while another, Paige Ford, works in a psychiatrist’s office in Huntington.

He has seven grandchildren and one great grandson.

Of his civic involvement, Gilpin said it’s something he has tried to keep up.

“I always volunteer, when I could,” he said. “It’s just part of being a citizen in a community.”

He describes it as a “synergistic thing.”

“I like working with groups of people,” he said. “You get more done with a group than working by yourself.”

Former Vice President Joe Biden is leading in the race for Ohio’s 18 electoral votes, according to a new poll... read more