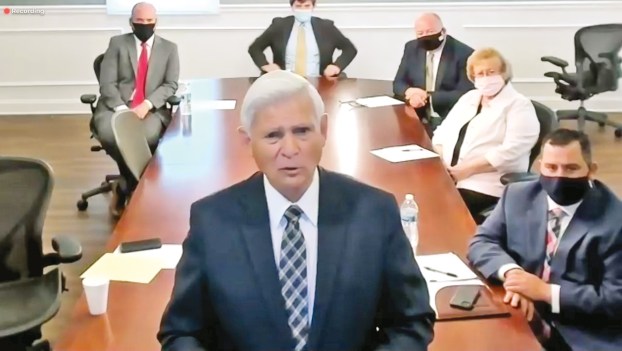 This year was different, of course, because of the COVID-19 pandemic and social distancing issues.

So, this year, it was decided to go virtual and use a Zoom meeting to showcase several Lawrence County businesses with the help of videos made in cooperation with Armstrong Cable.
The event began with a message from U.S. Rep. Bill Johnson, R-Ohio, who recommended that students look at a career in manufacturing.

“There are good jobs in manufacturing to be had,” he said.

Bill Dingus, the executive director of the Lawrence County Economic Development Corp., explained that they had planned a bigger event at Collins Career Technical Center with the school having manufacturing camps that couldn’t be done “because with the pandemic everything is different.

CCTC has the RAMTECH program that teaches students many aspects of manufacturing and the RAMTECH students have done things like restoring the World War II 75-mm artillery cannon in the veterans’ section in Ironton’s Woodland Cemetery. Some of the students have gone on to have careers at Toyota plants, where they use the skills they learned at the school.

In one video segment, Zach Moore, the owner of Swift Manufacturing in Ironton, showed how the company uses both water cutters and laser cutters to manufacture parts for industries and how they have made metal signs for local companies such as The Vault and Bear Studios, as well as artistic security doors for Rock Hill schools.

“We are a jobs shop, we do anything and everything that comes through the doors,” he said.

He said the current way of taking a large slab of steel and cutting to parts may soon be joined by machines that can 3-D print metal parts.

“This area was once known for the steel it manufactured,” he said, adding the products were known around the world for its quality. “I would love to see manufacturing come back.”

Carl Grover, owner of Engines Inc., talked about his company has been around for 60 years and he’s seen 400-500 people retire from it.

The company does a number of things, including fabricating and machining both small and large parts to making cranes that unload freight off rail cars to repairing rail cars.

“We are known across the country for our work,” Grover said, adding the company does businesses with most of the railroad companies.

Another success story was Superior Marine Inc. in South Point does barge repair and tow boat manufacturing. The company has been in business since 1977 and supports companies in nearly all sectors of business in America.

GTL Forest Group in Ironton showed how they take green lumber and then dry it out in kilns for use in a number of businesses. The company processes about 850,000 feet a month.
Rick Griffith, president of McGinnis Inc., talked about how the company does tow boat barge repair and how the company does business from its site in Lawrence County all the way down to New Orleans.

After the video segments ended, Dingus pointed out that Griffith worked his way up from being a deck hand to be president of the company.

“There are tremendous possibilities in manufacturing,” Dingus said.

He said that the LEDC and the chamber appreciate all their partners in Lawrence County and that they all working to bring manufacturing back to the area.

The final video segment was from Ohio Gov. Mike DeWine, who pointed out that 17 percent of the state’s gross domestic product comes from the manufacturing sector.

“That is 700,000 jobs with a $43 billion payroll,” he said, adding that Ohio exports $53 billion worth of products to hundreds of countries and territories.

Every year, National 4-H Week sees millions of youth, parents, volunteers and alumni come together to celebrate the many positive... read more