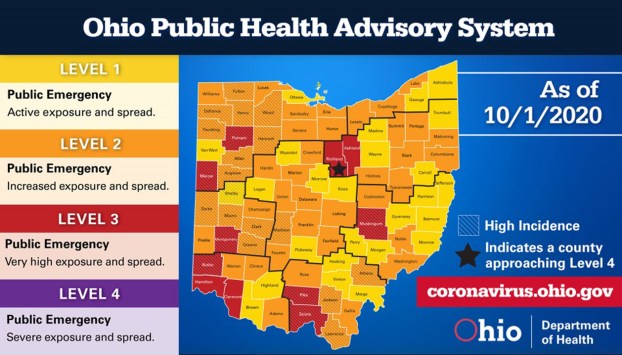 Lawrence County sixth highest in occurrence of the virus

COLUMBUS — There was no change in Lawrence County and its neighbors in the latest COVID-19 alert map issued on Thursday.

Lawrence County remained at Orange Level Two on the Ohio Department of Health’s map, as did Jackson and Gallia Counties.

Scioto County stayed at Red Level Three for the second week. It was the county’s second stint at the elevated threat level on the four-tier system.

Four other counties moved into the Level Three designation, making a total of 11 counties. No counties are listed at the highest alert, Purple Level Four.

“Today Ohio is reporting 1,327 new cases in Ohio, which is higher than what Ohio has reported during the past few weeks,” Ohio Gov. Mike DeWine said at this Thursday news conference.
DeWine also spoke of a travel advisory for seven states — Idaho, South Dakota, Iowa, Missouri, Kansas and Mississippi.

“If someone must travel to one of the states (…), whether for business or personal reasons, we recommend that they self-quarantine for 14 days after they return to prevent the potential spread of the virus here in Ohio,” he said.

The state also released new statistics on the county-by-county rate of occurrence for the virus.

Lawrence County is ranked at number six, down one from last week, when the state began compiling the numbers.

Chamber of Commerce, Armstrong to host virtual forums for candidates