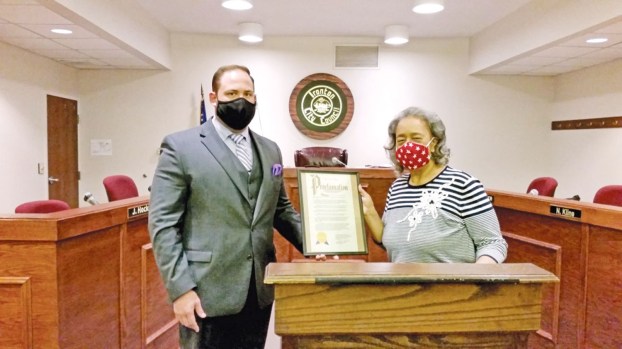 Supporting those in need

Normally at this point in October, Elaine Payne, the director of the Lawrence County Domestic Violence Shelter, is putting the final touches on a big event at Ironton’s Ohio University campus to raise awareness about domestic violence awareness month.

On Thursday, the first day of Domestic Violence Awareness month, Payne attended a tiny ceremony in the Ironton City Council Chambers to receive a proclamation from Mayor Sam Cramblit, who wore a purple tie and pocket square as part of the domestic violence awareness.

“I feel that it is important to bring awareness to the work the Lawrence County Domestic Violence Shelter is doing,” he said. “That way our community can know there are resources out there and to support the efforts of the shelter.”

Due to the COVID-19 pandemic, gathering a couple hundred people in an auditorium is out of the question.

“To publicly gather is out of the question,” Payne said. “

Instead, Payne and volunteers will be putting purple ribbons on lamp posts in the downtown area to lead people to a display near the fountain at Rotary Fountain Square.

“We’ve got a plaque that explains about wearing purple. Purple is for bruises, for women or men, who suffer domestic violence,” Payne said. “The mayor said we could put purple ribbons on the lamp posts all the way down to the fountain on Center Street. And we have little flags that say “Stop domestic violence” to put around trees. And we are going to have a little plaque there too that has our name and our hotline number if you need help.”

“There is somebody on call 24 hours, weekday, weekends and holidays,” Payne said. “We are here to help.”

Payne said they are trying to think of other events but the shelter only has four people on staff “and I don’t want to have something where we have a crowd. I am thinking about it, but I’m not really sure right now.”

Payne said they expected to have more people requiring their services during the pandemic, but that hasn’t happened until recently.

“We thought, with everything going on, we would be completely overwhelmed, but surprisingly, not until lately, we would get calls but they didn’t want to come in,” she said. “But now, it seems like all the husbands are putting the wives out or something. I don’t know why. We are averaging four or five calls a day of people needing housing.”

Another issue the shelter is facing is that the state recently cut their funding by 37 percent.