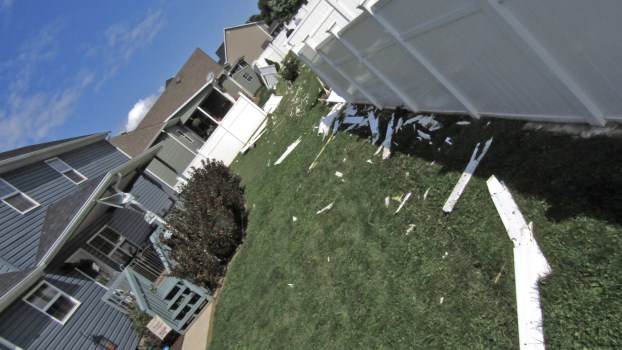 Five yards were damaged after a car, with Michigan tags, in pursuit by the Ohio State Highway Patrol, ramped both sides of the railroad tracks early Sunday. (The Ironton Tribune | Austin Johnson) 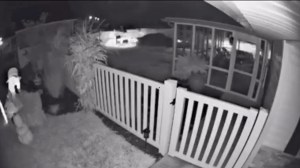 In this screengrab, from a resident’s security camera, a car, in pursuit by the Ohio State Highway Patrol, can be seen coming through a residential yard in South Point, after crashing through a wooden fence early Sunday. (Submitted photo)

SOUTH POINT — A car in pursuit by the Ohio State Highway Patrol struck a total of five yards in South Point, after ramping both sides of the railroad tracks early Sunday.

According to South Point resident Ernest McGraw, state troopers told him they were in pursuit of a vehicle with Michigan tags, and that the car was going 70 miles per hour, missing the curve on Alicia Street and Scioto Avenue.

McGraw was in the fifth house down on Miller Court, where the vehicle landed in his garden and then was towed away by the police shortly after. The driver was said to have fled the scene.

“I had just been out here with my dog, because she had just woke me up wanting to go out, and I had just turned and made it back to the bedroom when all of this happened,” McGraw said. “I could have been here in the middle of it. I was amazed when we pulled it up on the security cameras from the house, you could see the car coming all the way up from the last house, just tearing fences down, and all the poppin’ when it would hit the fences. It’s amazing, and I’m thankful I was back in the house before it actually went down.”

The car, which entered the village from the west, first took Solida Road and then North Kenova Street, and burst through McGraw’s fence at approximately 3:54 a.m, taking out his grill and side fencing.

“No one was hurt, that is the main thing”, McGraw said. “I’m thankful the car didn’t come through our house.” 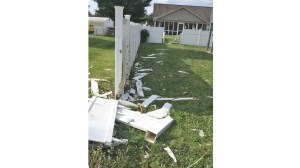 Five yards were damaged after a car, with Michigan tags, in pursuit by the Ohio State Highway Patrol, ramped both sides of the railroad tracks early Sunday. (The Ironton Tribune | Austin Johnson)

Another neighbor recounted hearing the crash.

“It made me jump right out of bed”, John Dickess, who lives next door, said. He was in bed when he heard a loud noise that he thought was an explosion.

“I told them (his family) to get up, something exploded, something’s wrong,” Dickess said.

He told his family “there may be another one coming”.

Dickess said, once he got out of his house to see the damage, his neighbor, McGraw, was standing in his yard.

As Dickess was speaking to McGraw, policemen were running down the busted yards, “telling us to ‘stay in the house and lock the doors’.

“It makes you mad, because you work hard and try to have things and then somebody else comes along and tears everything up,” Dickess said. “It could have been a lot worse.”

He said he remains looking on the positive side, because no one was hurt.

South Point police chief Chris Mahjer said his department is dealing with the aftermath of the incident and effects on the neighbors’ property.

“It’s a mess,” he said, adding that the pursuit is being handled by the Ohio State Highway Patrol. He noted that it originated outside the village.

It’s unclear if there was more than one suspect, according to state troopers, who said the suspect fled the scene early Sunday morning.

Trick or Treat in Ironton will be Oct. 29

Despite the pandemic, the City of Ironton will continue the Halloween trick or treating tradition. It will be on Thursday,... read more