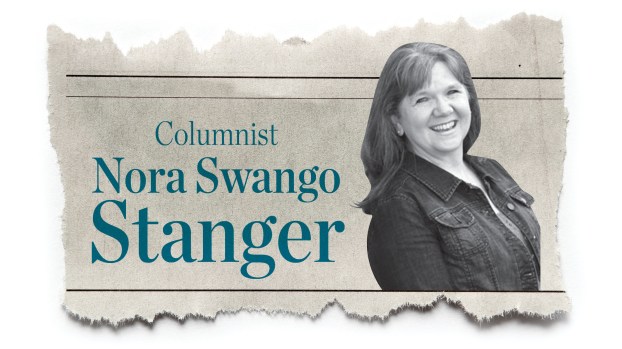 When KC and I were first married, I told him that if he gave me a porch swing, I’d never ask for another thing.

I haven’t always kept that promise, but the porch swing has remained one of the most treasured possessions we have.

We’ve had the same swing for more than 38 years. It has been re-stained twice and desperately needs a third coating. The boards are thinning and there is a noticeable sag in the middle of the seat.

If objects had memories and could tell their stories, I wonder what this old porch swing would say.

Having been transported from Abilene, Texas to Cincinnati, it has held an important place on the balconies and porches of two apartments and two houses.

The swing has held the bodies of visitors from all over the world, immigrants trying to find a place to call home and people who have never been out of their home counties.

It has welcomed people of high status and wealth, as well as those of small standing, known only by a few.

During good weather, it was the official rocking chair for babies with earaches and those needing to be soothed after a fall.

It has heard the giggles of little girls ‘camping’ on the porch during many slumber parties.

It has listened to the private conversations of teenagers and neighbors seeking solace.

When our daughter Hope was four years old, she wanted to create a special birthday present for her dad. She took a small tape recorder to the porch, banishing the rest of us to the indoors, saying she needed ‘private time.’

We peaked out the door to hear her, on the swing singing original songs, lyrics and melody inspired by her love for her daddy.

On his birthday, she presented KC with a treasured audio recording of her little voice, full of a preschooler’s lisp, singing, ‘Oh how I love my daddy. He buys me stuff. He locks the door at night and takes care of us.’

Hundreds of times, KC and I sat on the swing, watching our young daughters recreate dramatic versions of Bible stories. We have worked on school projects, held birthday parties, had picnic dinners and watched as fierce storms passed by/ sitting safely on the porch swing.

We’ve covered it with couch cushions to allow one to sprawl across it, swinging as a beloved book was read.

When Hannah was seven, she accidentally sprayed a toxic substance in her eyes. KC wasn’t home at the time and I was in a panic.

The pain was unbelievable. Directions on the spray can said to get immediate medical attention. Frantically, I called 911. It was the swing that held Hannah and a paramedic as he flushed her eyes and calmed us all.

Our porch swing has witnessed KC and my relationship as we worked through worries, made plans for our future and discussed the mundane happenings of our life.

It has been the perfect vessel to hold us as we drink morning coffee and watch birds build nests.

The porch swing has heard deep secrets, learned of elusive dreams and heard the sobs of disappointments.

More recently, the porch swing has been introduced to technology and listened in to Zoom meeting, sometimes including hundreds of unseen people.

Lately, there was talk among the family that perhaps we should replace the old swing with a newer, sturdier and more attractive swing.

The idea was quickly dismissed.

This sagging old swing. with its peeling paint knows us more intimately than we know ourselves. It has served us well.

The decision was quickly made — we will shore up this treasured possession’s weak parts and continue to be wrapped in its comfort for years to come.

Nora Swango Stanger, a Lawrence County native and Appalachian outreach coordinator for Sinclair Community College, can be reached at norastanger@gmail.com.

EDITORIAL: Learn from this moment

The nation has been absorbing the news, which came in the early hours of Friday, that President Donald Trump and... read more