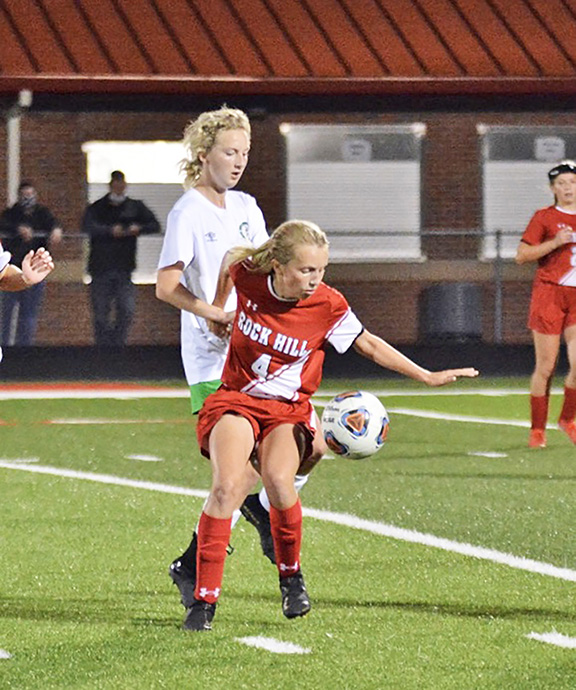 Rock Hill Redwomen’s Emmi Stevens (4) takes a pass and looks to score one of her two goals in a 3-2 win over the Fairland Lady Dragons. Rock Hill won the OVC soccer title with the victory. (Robert S. Stevens/The Gold Studio in Ironton)

PEDRO — Winning the Ohio Valley Conference soccer championship was so nice, the Rock Hill Redwomen decided to do it twice.
Rock Hill successfully defended their OVC soccer title as they held off the Fairland Lady Dragons 3-2 on Tuesday.
Rock Hill is now 9-1-2 on the season and 6-0-1 in the conference.
“The girls played so hard. I am just so proud of them,” said Rock Hill head coach Summer Collins.
Rock Hill lost 10 seniors from last year’s OVC championship team and only had 14 players on the roster this season.
“I would say I didn’t expect to win the league, but we definitely had to work harder. And these girls have worked so hard. There were games when we had injuries or someone missing for school and the girls really stepped up.”
Rock Hill took the lead seven minutes into the game as Bri Reynolds scored on an assist from Emma Scott.
Emmi Stevens then scored with an assist from Ellen Heaberlin at the 18-minute mark for a 2-0 lead at the half.
Stevens notched her second goal of the game seven minutes into the second half off an assist from Reynolds to give the Redwomen what proved to be the winning goal.
Fairland did not have a shot on goal until Olivia White scored on a corner kick with 10 minutes to play.
Five minutes later Maddie Miller had an unassisted goal and suddenly Fairland was within 3-2.
But the Redwomen defense held on to secure the win and the league title.
Rock Hill visits Piketon on Thursday and travels to Gallipolis next Tuesday for their final OVC game.
Fairland 0 2 = 2
Rock Hill 2 1 = 3
First Half
RH – Bri Reynolds (assist Emma Scott) 7:00
RH – Emmi Stevens (assist Ellen Heaberlin) 18:00
Second Half
RH – Emmi Stevens (assist Bri Reynolds) 7:00
Fa – Olivia White (unassisted) 10:00
Fa – Maddie Miller (unassisted) 5:00