Sandra Daniel created this oil painting, depicting the old White Cottage School in South Point, which was given to the village at Tuesday’s meeting of council.

A view to the past: Painting depicts former South Point school 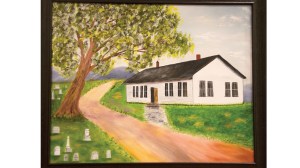 SOUTH POINT — On Tuesday, the village of South Point received a gift that celebrates its past.

The small building, which was located across the street from White Cottage Cemetery, on the corner of North Kenova Road, was an elementary school and served the village until the 1940s and was torn down sometime after World War II, Mayor Jeff Gaskin said.

Daniel said she used old photographs to recreate the view, which is depicted looking from the east in the painting in the direction of what is now Speedway. The cemetery can be seen in the lower left of the piece.

The village has been working on projects in the location, recently expanding the cemetery after acquiring adjacent property and selling new plots on the grounds. Plans are also underway to build a fence and gate for the historic location.

Gaskin presented the painting to council at Tuesday’s meeting of council.

“We are thrilled to have it,” he said.

He said the painting will go on display in the lobby of village hall for now, until a permanent home for it is decided on.

Conrad Allen, of Ottawa, Ohio, has been walking around the state of Ohio with three flags — an American flag,... read more