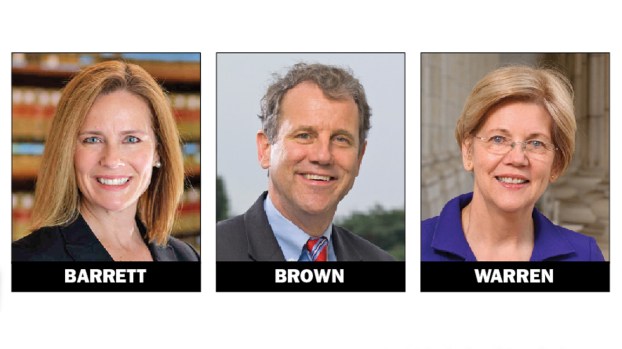 WASHINGTON, D.C. — U.S. Sen. Sherrod Brown, D-Ohio, and Elizabeth Warren, D-Massachusetts, hosted a press call on Thursday to highlight what they said was Judge Amy Coney Barrett’s anti-worker record and how, with her confirmation, the Supreme Court could further undermine workers’ rights.

President Donald Trump nominated Barrett to fill the seat left vacant on the court by the death of Ruth Bader Ginsburg. Senate Majority Leader Mitch McConnell, R-Kentucky, has vowed to confirm her to the position before the Nov. 3 general election, while Democrats have called on the Senate to follow the precedent set with McConnell’s rejection of

President Barack Obama’s nomination of Merrick Garland in 2016 and not move to fill a Supreme Court vacancy in an election year.

Brown’s office said that, “in just three years on the 7th Circuit, Barrett has consistently ruled against working Americans in favor of their bosses and big corporations and that, in her time as a judge, Barrett has made it impossible for a worker to get retirement benefits earned, ignored the scope of truckers’ actual employment duties to deny them overtime pay, disregarded 7th Circuit precedent to rule against employees alleging wrongful termination, blocked a jury trial for a woman alleging she was fired due to a brain tumor, limited protections for older workers, made it harder for gig workers to get overtime pay, and sided with an employer who segregated workers by race.”

“Right now, millions of Americans are struggling because of President Trump’s failure to get this pandemic under control,” Brown said. “Yet Trump and Mitch McConnell have walked away from the negotiating table and refused to extend UI benefits for the half a million Ohioans out of work, refused to help people pay the rent and the bills, and refused to get more money to our schools and small businesses.”

Brown said Republicans’ answer is “to tell Ohioans ‘you’re on your own’ while they move heaven and earth to put another justice on the Supreme Court that will always side with corporations over workers.”

“We cannot stand by and watch unelected judges — installed by politicians who take their cues from Wall Street and corporate lobbyists — continue to erode workers’ rights,” he said.

Warren said if Barrett is confirmed, she will “bring her anti-worker outlook to the highest court for generations to come.”

“She will also help advance a long-standing Republican goal to overturn the ACA and devastate health care for workers, especially the millions who lost their jobs during the COVID-19 pandemic along with their health insurance,” Warren said. “Senate Democrats are fighting this nomination — and we will not let Republicans get away with this illegitimate power grab to tilt the courts further in favor of billionaires and giant corporations.”

Lawrence County back to Level Three in COVID-19 alert