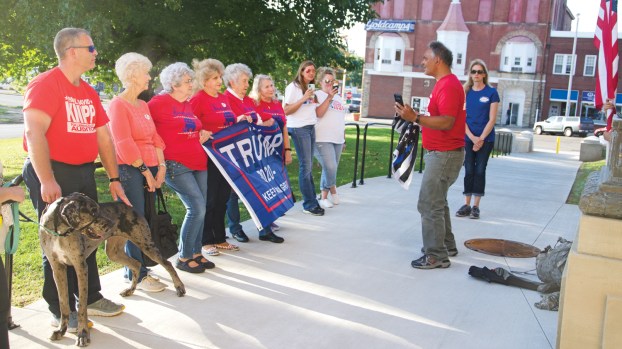 Conrad Allen, of Ottawa, Ohio, speaks with local Republicans on the steps of the Lawrence County Courthouse on Wednesday. He has been walking around the state of Ohio with three flags — an American flag, a Back the Blue flag and a Trump 2020 flag. (The Ironton Tribune) 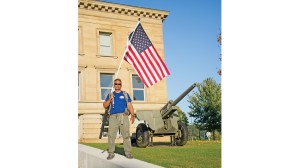 Conrad Allen, of Ottawa, Ohio, has been walking around the state of Ohio with three flags — an American flag, a Back the Blue flag and a Trump 2020 flag. Allen stopped at the Lawrence County Courthouse on Wednesday. He said he has been on his walk since early September. (The Ironton Tribune)

Since early September, Conrad Allen has been on foot, walking around the state of Ohio, carrying three symbols he believes in.

The retired Army veteran is stopping to talk to people along the way, and showing them an American flag, a Back the Blue flag in support of police and a campaign flag for Donald Trump.

Allen, 52, said he prefers to walk, rather than drive, as “world moves too fast,” and a slower pace makes it easier to meet and talk to others along the way.

On Wednesday, he made a stop in Ironton, at the Lawrence County Courthouse, where he spoke to a group of about 15 well wishers and supporters of his message.

Allen said one of his prime motivations is to stop what he says is the threat of “socialism and communism.”

He said Trump appealed to him because of this.

“He said ‘This will never be a socialist country,’” Allen said.

Allen said he also took issue with the message of the Black Lives Matter protests, which have taken place across the nation in the aftermath of several people who have died in incidents with police.

He said, as a black man, he agreed with the premise that “Black lives matter.”

“Of course, they do, in the Christian sense,” Allen said, but added he felt the political movement was “couple with radicalism and socialism.”

Allen said he plans to continue walking beyond the election, wrapping up his trek in late November.

He said he has had a pleasant experience everywhere he goes, even from those who do not support his candidate.