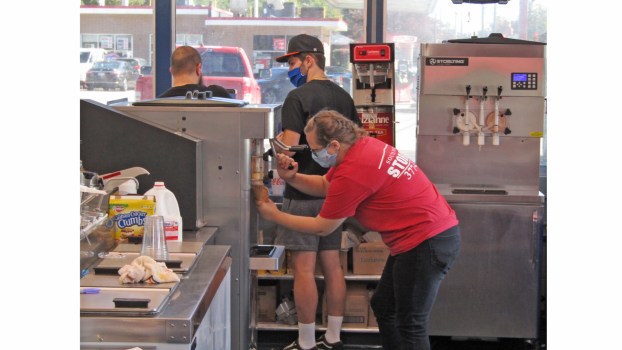 The Shake Shoppe in Ironton has fall-themed items on its menu. (The Ironton Tribune | Austin Johnson)

FOOD: Fall into flavor – Pumpkin treats are now on the menu at Shake Shoppe 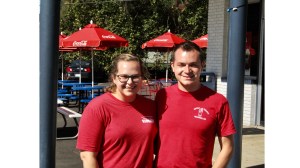 Robby Brown and Maddy Cogan own and run The Shake Shoppe in Ironton. (The Ironton Tribune | Austin Johnson)

The Shake Shoppe in Ironton has the cure to your pumpkin cravings this fall. Some specials the Shake Shoppe has to offer this month are apple dumplings, pumpkin shakes, and both hand-dipped and soft serve pumpkin ice cream.

Robby Brown and Maddie Cogan run the eatery, which is now serving pumpkin pie coffee, flurries and shakes. “It’s a treat for everybody,” Maddie Cogan said. “Now you can have pumpkin in the morning and pumpkin for dessert.”

“We opened up in June of 2019,” Brown said. “Of course, we re-opened up something that was already a tradition in Ironton for 70-plus years. We’ve tried to keep the tradition alive while also adding new twists, and new flavors, and it seems like our customers really like that.” Eventually they hope to release a calendar featuring seasonal ice cream flavors. 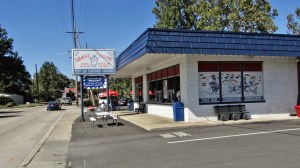 The Shake Shoppe is located at 1625 Liberty Ave. in Ironton. (The Ironton Tribune | Austin Johnson)

Feedback has been really positive, Cogan said. “I think people respond well to good customer service, we are constantly reminding our employees to treat people like you would like to be treated and prompting them to smile and make customers feel welcomed.”

Cogan and Brown put emphasis on customer service, but they also take time to focus on their employees. Once a quarter, on the Sundays that the Shake Shoppe is not open, a team building event takes place. These events, which may include skiing, cornhole or some sort of celebration, are scheduled to give employees “a chance to relax and be with each other.”

Brown echoed Cogan’s remarks saying, “It’s been great, people are excited to see something that was a tradition, that’s a staple here but yet, new life breathed into it.” Brown mentioned how the little things like paving the parking lot made a difference, “it’s the little things, they add up, people appreciate it and we appreciate them.”

The Shake Shoppe is open Mon-Sat at 6:30 a.m., starting off with breakfast, and closing at 9 p.m.