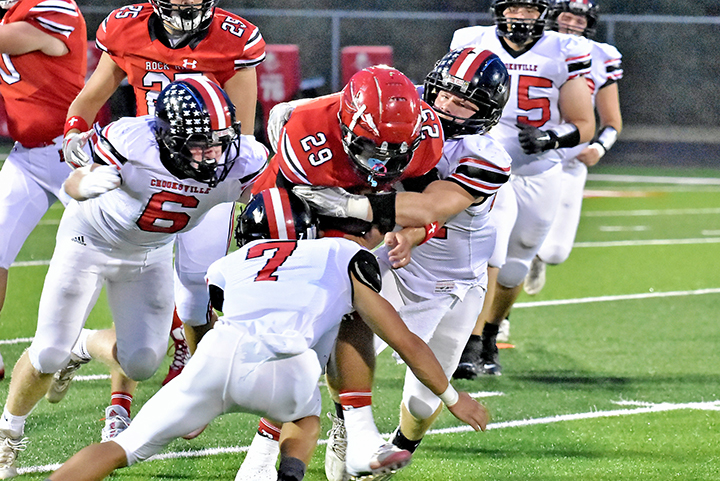 Rock Hill Redmen fullback Hayden Harper (29) powers through a pair of Crooksville defenders as he gains some of his 209 yards in a 26-10 Division 6 playoff win over the Crooksville Ceramics on Saturday. (Kent Sanborn of SouthernOhioSportsPhotos.com)

PEDRO — My home, my ball and my clock.
Maybe the Rock Hill Redmen weren’t sure how things worked since this was the first-ever home playoff game in program history. They must have thought they could set their own rules.
Or maybe it was just the Redmen deciding to assert themselves with a strong performance by the offensive line and a punishing, time-consuming ground game.
Yeah, it’s the latter.
The Redmen controlled more than 34 minutes of the clock as they ran the ball 64 times for 333 yards led by senior fullback Hayden Harper with a career game as he ran 36 times for 209 yards and two touchdowns in a 26-10 win over the Crooksville Ceramics in the first-round of the Division 6 Region 23 football playoffs on Saturday.
“We wanted to control the line of scrimmage and we were able to do that. Our offensive line is young but getting better and they played well,” said Rock Hill coach Mark Lutz.
“But our backs blocked as well as they have all season. We wanted to run Harper but I had no idea he ran the ball 36 times. He was a workhorse and he answered the bell each time his number was called.”
Harper was not alone in the ground attack. Owen Hankins carried 14 times for 53 yards, Hunter Blagg got 43 yards on nine tries and quarterback Hunter Massie ran just once but had a crucial 23-yard pickup.
Skyler Kidd only carried four times but was instrumental with his blocking.
“I’d like to take my offensive line to dinner but I don’t have any money,” said Harper with a laugh. “They did a great job.”
The offensive line of centers Landon Harper and Seth Schob, guards Jacob Schwab, David Jenkins and Brice Schob, tackles Lane Smith and Andrew Medinger and ends Brayden Malone, Andrew Clark and James Knipp consistently gave the backs running room.
Crooksville took opening kickoff but was forced to punt after four plays. The 47-yard punt went into the end zone and the Redmen had the ball for the first time.
Rock Hill drove 80 yards in 12 plays as Harper went 6 yards to cap the drive and it was 6-0 at the 4:38 mark.
Crooksville (2-5) drove from the 11-yard line to the Rock Hill 6-yard line. But the defense tackled David Chapman for a 3-yard loss on first down and forced two incomplete passes.
On fourth and goal, Zack McLean kicked 27-yard field goal on the first play of the second quarter and the Ceramics trailed 6-3.
Rock Hill (3-4) then drove 73 yards on 15 plays with Harper going the final yard for the touchdown. Harper carried eight times in the drive for 34 yards.
Massie’s 23-yard run to the 9-yard line was the key play in the drive.
The conversion run failed and the lead was 12-3 with 3:03 left in the half.
Crooksville struck quickly with an 11-yard pass from Noah Dickerson to Chapman, a one-yard run by Ethan Sprankle and then Dickerson hit Sprankle with a pass and he broke three tackles as he completed the 68-yard scoring pass.
McLean’s conversion kick cut the deficit to 12-10 with 2:06 on the first half clock.
Rock Hill took the second half kickoff and marched 63 yards on 15 plays to go up 19-10. Harper carried 10 times in the drive including the final seven plays as he finished off the drive with a 1-yard touchdown run.
Parker Knipp boomed the conversion kick with 3:26 left in the quarter.
On its next possession, Crooksville was forced to punt and shanked the kick for just 13 yards.
The Redmen got the ball at the Ceramics’ 40-yard line and the drive spilled over into the fourth quarter with Owen Hankins running the final yard for a 25-10 lead.
Knipp’s conversion gave Rock Hill the 16-point cushion with 7:54 to play.
Crooksville got to the Rock Hill 26 before a holding call pushed the ball back to the 39. After an incomplete pass, Rock Hill’s Levi Jiles intercepted a pass and returned it 29 yards to the Ceramics’ 45.
Rock Hill failed to convert on a fourth-and -2 giving the ball back to Crooksville.
Dickerson completed 5-of-9 passes but he was sacked by Schwab on fourth-and-10 to seal the first home game playoff win for the Rock Hill.
Rock Hill plays at Fairland in the second round of the playoffs at 7 p.m. next Saturday.
Crooksville 0 10 0 0 = 10
Rock Hill 6 6 7 7 = 26
First Quarter
RH – Hayden Harper 6 run (kick failed) 4:38
Second Quarter
Cr – Zack McLean 27 field goal 11:58
RH – Hayden Harper 1 run (run failed) 3:03
Cr – Ethan Sprankle 68 pass from Noah Dickerson (Zack McLean kick) 2:02
Third Quarter
RH – Hayden Harper 1 run (Parker Knipp kick) 3:26
Fourth Quarter
RH – Owen Hankins 1 run (Parker Knipp kick) 7:54
——
Cr RH
First downs 14 22
Rushes-yards 14-60 64-333
Passing yards 218 0
Total yards 278 333
Cmp-Att-Int 12-25-1 0-0-0
Fumbles-lost 0-0 0-0
Penalties-yards 5-35 4-20
Punts-average 2-30.0 0-00.0
Individual Leaders
RUSHING —Crooksville: David Chapman 7-29, Noah Dickerson 6-30, Ethan Sprankle 1-1; Rock Hill: Hayden Harper 36-209 3TD, Owen Hankins 14-53 TD, Hunter Blagg 9-43, Hunter Massie 1-23, Skyler Kidd 4-5.
PASSING — Crooksville: Noah Dickerson 12-25-1 218 TD; Rock Hill: None.
RECEIVING — Crooksville: Ethan Sprankle 3-135, David Chapman 3-48, Brayden Cavinee 1-11, Thomas Russell 4-24; Rock Hill: None.