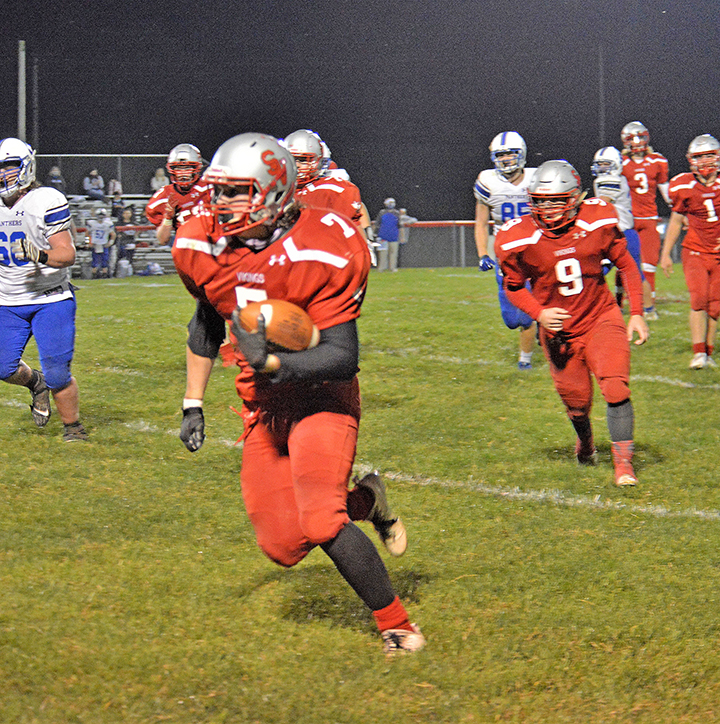 Symmes Valley Vikings’ running back Grayson Walsh (7) finds some open ground as he picks up big yardage in a 36-14 Division 6 playoff win over the Southeastern Panthers on Saturday. (Kayla Niece of Kaptured by Kayla Photography)

WILLOW WOOD — “Now you see it, now you don’t” seems to sound like a magic trick.
Evidently, the Symmes Valley Vikings are big fans of guys like David Copperfield.
Facing an offense that is contrary to today’s spread offense most teams employ, the Vikings didn’t seem to have a lot of problems figuring out the trick as they rolled past the Southeastern Panthers 36-14 in the first-round of the Division 6 Region 23 playoffs on Saturday.
Symmes Valley head coach Rusty Webb said the Vikings see the double-wing offense when they play Southern Ohio Conference foe Northwest, but Southeastern also runs the offense and the Vikings knew what to expect in the playoff game.
“We only see this offense once a year, but we’ve played well the past two weeks against this offense. It’s hard to play against,” said Webb.
Meanwhile, the Vikings’ offense generated 326 yards rushing on 41 carries. All their yardage was on the ground.
Ethan Patterson rushed 11 times for 101 yards and a touchdown with Josh Ferguson getting 95 yards on 12 attempts with a TD to lead the ground game. Grayson Walsh added 68 yards on 10 tries and scored once.
“Our offense played much better this week. Any time you rush for more than 300 yards your linemen are doing a good job and your backs are doing a better job of blocking for each other,” said Webb.
The defense didn’t let the offense take the entire spotlight. The Vikings gave up 270 total yards but 84 came against the second team.
Southeastern ran for 152 yards and threw for 118.
The Vikings (5-2) will now play at Nelsonville-York in the second round of the playoffs at 7 p.m. next Saturday.
“It’s always nice to host and it’s nice to win. But definitely there are some things to clean up because each round things get tougher,” said Webb.
Symmes Valley scored first as Luke Leith came up with an interception to set up a quick four-play, 44-yard drive that resulted in a 4-yard scoring run by Walsh who also ran for the conversion and an 8-0 lead.
Southeastern went 51 yards in 12 plays capped by Mikey Nusser’s 6-yard scoring run and the Vikings led just 8-6.
But after the ensuing kickoff, the Vikings marched 65 yards in six plays with Patterson doing the scoring honors on a 25-yard scamper.
The Vikings scored against before halftime as Eli Patterson scooped up a fumble caused by a bad snap and he raced 18 yards for the touchdown and a 22-6 lead at the break.
Symmes Valley started the second half with a 68-yard, five-play drive and Ferguson carried the final 9 yards for the score. Walsh ran for his second conversion and it was 30-6.
The Vikings’ backups got the next touchdown when Levi Niece raced 27 yards for a touchdown and it was 36-6.
Southeastern completed the scoring when Nusser shook loose on a 50-yard TD run. He also ran for the conversion.
Southeastern 0 6 0 8 = 14
Sym. Valley 8 14 8 6 = 36
First Quarter
SV – Grayson Walsh 4 run (Walsh run)
Second Quarter
SE – Mikey Nusser 6 run (run failed)
SV – Ethan Patterson 25 run (Grayson Walsh run)
SV – Eli Patterson 18 fumble recovery (run failed)
Third Quarter
SV – Josh Ferguson 9 run (Grayson Walsh run)
Fourth Quarter
SV – Levi Niece 27 run (kick failed)
SE – Mikey Nusser 50 run (Nusser run)
——
SE SV
First downs 12 19
Rushes-yards 31-152 41-326
Passing yards 118 0
Total yards 270 326
Cmp-Att-Int 10-16-1 0-3-0
Fumbles-lost 3-2 2-0
Penalties-yards 7-55 11-102
Punts-average 2-12.0 2-37.5
——
Individual Leaders
RUSHING — Southeastern: Mikey Nusser 17-140; Symmes Valley: Josh Ferguson 12-95, Luke Leith 4-18, Derek Crum 2-9, Grayson Walsh 10-68, Levi Niece 2-35, Ethan Patterson 11-101.
PASSING — Southeastern: Clay Morgan 10-16-1 118; Symmes Valley: Luke Leith 0-3-0.
RECEIVING — Southeastern: Mikey Nusser 5-94; Symmes Valley: None.