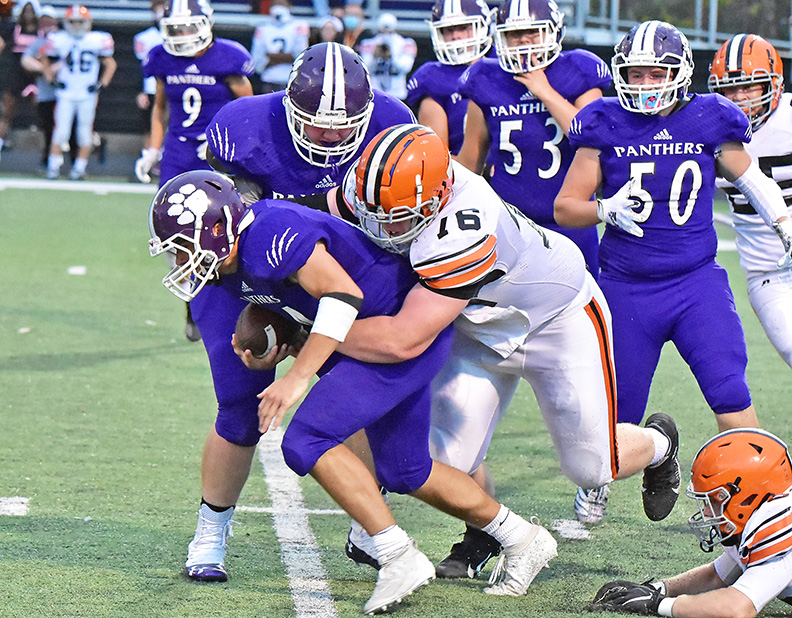 The welcome mat has been rolled out. But don’t expect the Ironton Fighting Tigers to be very hospitable when the game begins.
The New Lexington Panthers visit Ironton for the first time on Saturday for the 7 p.m. kickoff to the Division 5 Region 19 playoff game.
The Panthers come into the game 4-3 while Ironton has steamrolled its way to a 6-0 record and is currently ranked No. 2 in the Associated Press Division 5 poll.
This is only the second meeting between the two schools and both have been in the playoffs. New Lexington won 38-6 in 2008 at Jackson.
New Lexington finished ranked No. 2 in 2008 and won a regional championship. It marked the program’s last playoff win until last week.
Ironton drew a first-round bye and is anxious to begin its playoff journey after finishing state runners-up last season as they fell just short of their goal.
This season, Ironton is looking to finish the job and it starts with New Lexington.
The Panthers’ 6-foot-2, 173-pound senior quarterback Logyn Ratliff threw for 371 yards and six touchdowns in a 41-6 romp over the Westfall Mustangs last week in the first round of the playoffs.
On the season, Ratliff is 110 of 166 for 1,799 yards and 18 touchdowns. He has been intercepted five times.
The running game is led by sophomore R Hobbs with 354 yards on 84 carries and four touchdowns. Ratliff is close behind with 323 yards on 73 carries and six TDs.
The top receivers are senor Zach Eveland with 28 receptions for 464 yards and three touchdowns, senior Brady Hanson with 24 grabs for 441 yards and seven TDs, senior Shaun Pletcher with 24 catches for 297 yards and four scores, and sophomore Tatem Toth with 17 receptions for 405 yards and two TDs.
The defense is led by junior H Kellogg with 89 tackles including 51 solo stops and seven tackles for a loss. Lane Ratliff with 34, Logyn Ratliff has 32 tackles, Pletcher 29 and Eveland 27.
The sack leader is Brody Agriesti with three and Toth had two.
Eveland and Logan Ratliff have four interceptions each and Hanson three.
Ironton is led by senior Reid Carrico who is just shy of 1,000 yards on the season despite only playing six games. Carrico has 963 yards on just 79 carries — a 12.2 yards per carry average — and he has scored 15 touchdowns.
Trevor Carter has 327 yards on 37 carries and four TDs and Cameron Deere 116 yards on 21 attempts and two scores.
Quarterback Tayden Carpenter is 52 of 80 for a 65 percent completion rate. He has thrown for 875 yards and 15 touchdowns. His only interception came on a tipped ball at the line of scrimmage.
Carpenter has also rushed 16 times for 118 yards and two touchdowns.
Ironton has a plethora of receivers led by senior Trent Hacker with 11 receptions for 267 yards and four TDs. Aaron Masters is next with 215 yards on eight catches with three scores and Carrico had 74 yards on five catches.
Landen Wilson had 80 yards on six grabs, Kyle Howell 79 yards on five catches, Erickson Barnes 60 yards on two grabs, Will York had 56 yards on four receptions, and Jaquez Keyes has 10 catches for 53 yards.
Defensively, Ironton has gotten a lot of contributions from a lot of different players.
Carrico leads the team with 26 tackles but defensive lineman Nate Cochran has 25 tackles — five for a loss — while Deere and Barnes have 24 stops each and Hacker has 17 tackles.
Gunner Crawford leads the defensive with three of the team’s eight sacks. Carrico, Cochran, Ashton Duncan, Wilson and York had one each.
Wilson has the team’s lone interception.
First-year placekicker Jimmy Mahlmeister is averaging more than 50 yards a kickoff with seven touchbacks. He is 39 of 39 on conversion kicks.
Howell averages 34 yards a kick as the team’s punter. His longest kick is 46 yards.