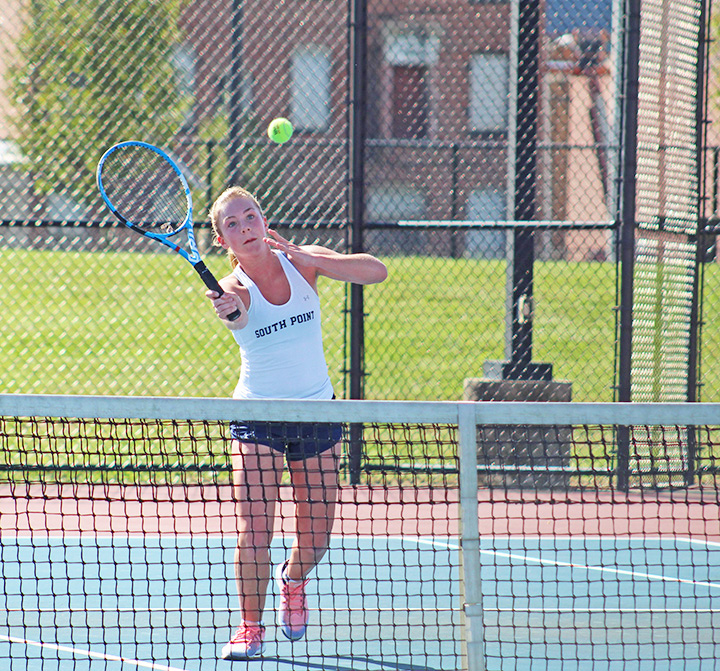 PORTSMOUTH — There was an old television show called “The Life of Riley” about a wing riveter.
South Point Lady Pointers have their own “The Life of Riley” which is about a freshman tennis player named Meredith Riley who put together a riveting performance at the Division 2 sectional and district tournaments.
Riley breezed through the sectional and then followed that with a stellar performance in the district tournament on Wednesday at Portsmouth High School to earn a trip to the state tournament.
“There were a couple of (matches) that were a little bit tough,” said Riley. “I think that I played really well as long as I stayed focused.”
Riley won all six sets in her three matches. She swept Portsmouth Notre Dame’s Kathryn Nelson by identical 6-0, 6-0 scores in the quarterfinals, then topped Anna Chen of Athens 6-4, 6-2 in the semifinals before dispatching Maddie Gill of Wheelersburg 6-2, 6-2 in the finals.
“Maddie Gill is pretty good. Anna (Chen) is also pretty good,” she said.
Riley now advances to the state tournament is set for Friday and Saturday, Oct. 23-24, at the Lindner Family Tennis Center in Mason.
“I thought that I could do it, especially after sectionals and I saw most of the girls. I was pretty confident I would make it to first or second in the district. But before the sectionals I wasn’t sure because I hadn’t seen any of the girls,” said Riley.
The favorite in the state tournament in Division 2 is senior Sydni Ratliff of Columbus Academy who is the defending state champion. Riley said she has never faced Ratliff.
“I think I can compete with those girls as long as I try my hardest,” said Riley. “I just need to play and not stress about it. I haven’t seen (Ratliff) but I’ve heard she’s pretty good.”
Macy Hitchcock of Eaton was a state qualifier last year and Riley said she has played travel tennis with Hitchcock.
Riley’s trip to the state tournament will continue what is now a family tradition. Meredith’s older sister Madison — now playing at Marshall University as a graduate student — also played in the state tournament.
Meredith is much younger than her sister and said the two only play against each other as practice and not in any competitive matches.
“Sometimes we’ll just practice, but we don’t really play a match. We play maybe a few points but we don’t play an actual match,” said the 5-foot-5 tennis standout. “I can at least stay in a rally with her right now. When I was younger, it was hard to return her balls since I was so little.”
Riley trains at the Huntington Tennis Center in Huntington, W.Va., under coach Roy Mercer. She usually travels to Indiana to play in tournaments. Her play in the sectional and district tournaments was her first high school matches this year in Ohio.
The top two singles and doubles teams advanced to the state tournament.