Rematches highlight 2nd round of playoffs 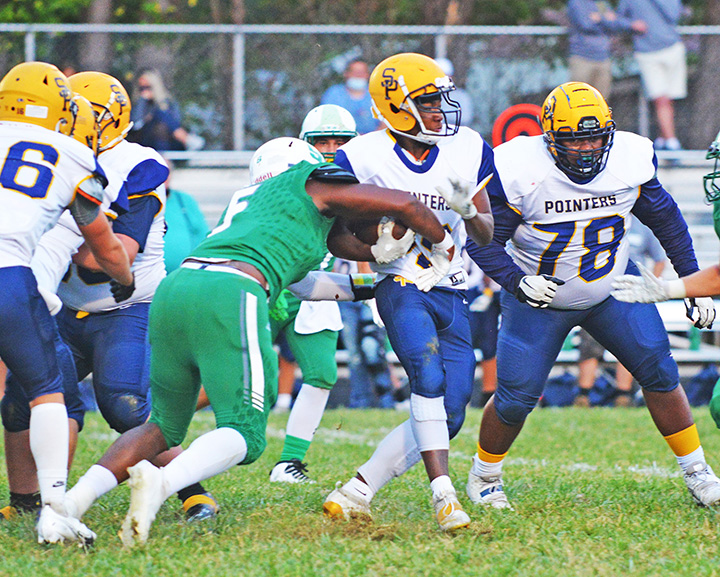 Coal Grove vs. Shenandoah, Round 2.
In 2017, the Shenandoah Zeps visited Coal Grove in the Division 6 playoffs. The game marked the first-ever home playoff game for the Hornets.
Coal Grove turned in some big defensive plays as they held off the Zeps 7-6.
The two teams meet again on Saturday in the Division 6 Region 23 playoffs but this time it’s the Hornets making the bus ride for the 7 p.m. Saturday game.
Shenandoah (4-2) has a balanced attack led by quarterback Dayton Hill, running back Briar Portman, slot back Cade Denius and wide receiver Robbie Cool.
Hill is 50-of-71 for 763 yards, nine touchdowns and five interceptions on the season.
Portman has rushed 88 times for 602 yards and has 10 total touchdowns. He also does the punting and averages 36.5 yards a kick.
Denius has 35 receptions for 471yards and five TDs while Cool had 14 catches for 25 yards and two scores.
Coal Grove (4-2) does most of its damage via the running game.
Fullback Austin Stapleton had 700 yards on 111 carries with 12 touchdowns. He is the program’s all-time leader in touchdown scored.
Running back Malachia Wheeler has carried 85 times for 607 yards and six TDs despite missing the Portsmouth game due to COVID restrictions.
Also in the mix is Chase Hall with 31 carries for 273 yards.
Quarterback Clay Ferguson is 10-of-19 for 98 yards and a score. Wheeler has six receptions for 37 yards and Hall one catch for 25 yards and a touchdown.
Coal Grove fans not attending the game can view it on kgp.tv/live
Speaking of Round 2, in a three-week span the Fairland Dragons will be playing the Rock Hill Redmen only this time it is a playoff game.
The two teams met at Rock Hill on Oct. 2 with the Dragons posting an easy 42-6 win.
Rock Hill drew its first home playoff game last week and beat Crooksville 26-10 and will not make the trip to Fairland for a 7 p.m. game on Saturday.
The Dragons use a wide-open offense that features three prime receivers in the speedy Gavin Hunt, Zander Schmidt and Steeler Leep.
Hunt has 31 receptions for 578 yards, Schmidt 16 catches for 231 yards and Leep 10 grabs for 210 yards.
Quarterback Max Ward is 71 of 116 for 1,158 yards with 17 touchdowns and five interceptions.
The main ground gainer is running back J.D. Brumfield with 70 carries for 525 yards.
The Redmen did not throw a pass last week in the win over Crooksville. They rushed 64 times for 333 yards led by fullback Hayden Harper with 36 carries for 209 yards and three touchdowns.
Owen Hankins has 489 yards on 92 carries for a 5.3 yards per carry average on the season with three TDs. Harper now has 94 attempts for 469 yards and 5.0 yards per carry and seven touchdowns while Hunter Blagg has 143 yards on 30 rushes for 4.8 yards per carry.
The Nelsonville-York Buckeyes (4-2) host the Symmes Valley Vikings (5-2) at 7 p.m. Saturday and the winner play the winner of the Fairland-Rock Hill game.
“They have some big kids but they aren’t as big as they normally are. They are very athletic and have a lot of veterans,” said Vikings’ coach Rusty Webb.
“They are very aggressive on defense. They have a really good linebacker and some skilled players. Special teams should play a big part. But in the end, it boils down to execution.”
The Buckeyes run the spread offense and it revolves around senior quarterback Drew Carter who is 78 of 130 passing for 1,145 yards and nine touchdowns along with eight interceptions.
Kobi Bennington leads the team in rushing with 216 yards on 46 carries with Carter gaining 145 yards on 49 attempts.
The receiving corps is headed up by Ethan Gail with 27 catches for 366 yards and three touchdowns. Zach Taylor and Alec Taylor have three and four receptions — respectively — and each has 107 yards. Zach Taylor has a touchdown.
The Vikings have a strong running game featuring a three-headed monster.
Luke Leith has 542 yards on 69 carries with seven touchdowns, Josh Ferguson had 489 yards on 56 attempts and six TDs while Ethan Patterson has 48 rushes for 415 yards and four scores.