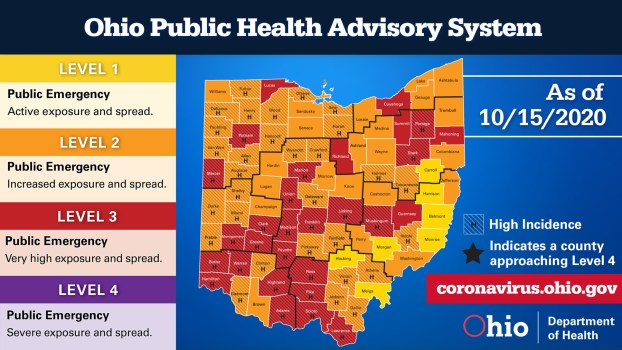 COLUMBUS — Lawrence County remained at Red Level Three for the second week on the COVID-19 alert map update, issued by the Ohio Department of Health on Thursday.

The news was not unexpected, as Lawrence County Health Department director Georgia Dillon told the Lawrence County Commission on Tuesday that she expected it would be the case.

“We have 13 new red counties today,” DeWine said. “Our local health department officials have told us this week that our schools are doing a good job. But what they are seeing is spread from social gatherings. These are not times to be complacent or comfortable. It is the time to be vigilant to protect yourself, your family, your friends and your neighbors.”

In addition to Lawrence County, neighboring Scioto County was also at Red Level Three on the state’s four-tier alert system. Gallia and Jackson Counties were listed at the lower designation of Orange Level Two.

It is the second stint at the higher alert level for Lawrence and Scioto, as both counties reached Red level Three in the summer.

“We also now have 52 counties that are high incidence as of today,” DeWine said. Ohio has 88 counties. “This means the county has seen more than 100 cases per 100,000 residents during the past two weeks.”

No counties were listed at the highest designation, Purple Level Four.

Lawrence County and its three surrounding counties all were marked with an “H” ranking, which represents a rate of high incidence.

Is first part of larger project by local artist A monarch butterfly mural by artist Todd Frazier is being created... read more