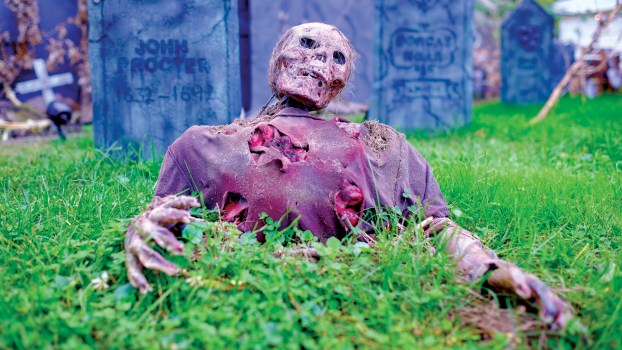 Larry Wilson and his wife, Kayla Wilson, have been operating the Wilson Halloween House on South Sixth Street in Ironton for three years. (The Ironton Tribune | Jeremy Holtzapfel) 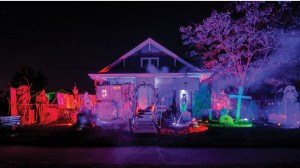 The Wilson Halloween House will be decorated through the holiday. For the final week of October, it will feature live actors in the yard. (The Ironton Tribune | Jeremy Holtzapfel)

Larry Wilson, of Ironton says Halloween has long been a favorite time of year for him.

“I’ve always loved it,” he said. “And scary movies as a kid and getting ready to go out trick or treating.

And he and his wife, Kayla have taken that passion for the holiday and turned it into an elaborate display.

The couple runs the Wilson Halloween House, which is now in its third year, with a yard and porch covered in decorations like cauldrons and figures like witches, monsters and more.

The display is so large, it takes months to set up fully. Wilson said he started building in mid-July, put the first piece up in August and has added each week since. 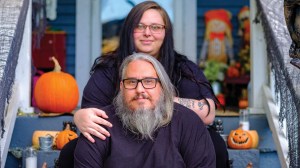 Larry Wilson and his wife, Kayla Wilson, have been operating the Wilson Halloween House on South Sixth Street in Ironton for three years. (The Ironton Tribune | Jeremy Holtzapfel)

“We started out small and it got bigger and bigger,” he said of how it’s grown over the years.

He said his job working at Lowe’s has been a big help, as nearly everything in the yard is handmade, whether it’s the tombstones constructed from foam, the detailed characters in the yard or the wooden backdrop on the porch.

This year’s graveyard has a theme, with each tombstone bearing the name of the accused in the Salem witch trials. Wilson said last year, he used the names of deceased rock stars.

While a few items are repeats, the vast majority of the display is set up different each year. Wilson said there are many additions this year.

He said they turn on lighting and smoke machines on weekends, with live actors in the yard, and it draws a crowd, with cars lining up waiting for it to start each night.

“This past weekend was pretty wild,” he said of the size of the crowd. He said some get out, while others stay in their cars and look. 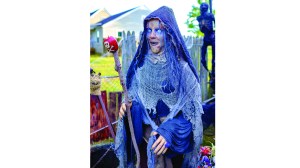 The Wilson Halloween House will be decorated through the holiday. For the final week of October, it will feature live actors in the yard. (The Ironton Tribune | Jeremy Holtzapfel)

With many Halloween attractions, like the Haunted Tunnel and the Halloween parade canceled because of the COVID-19 pandemic, Wilson said he hopes he can provide some entertainment.

“With the pandemic going on, it still gives them something fun they can come and look at,” he said.

He said the actors and lighting will be there from 8-10 p.m. on Fridays and Saturdays each weekend, while, the last week of October, they plan to do the display each night.

They are hoping to use the attraction to help out local charities.

At 8 p.m. on Friday they are teaming up with representatives from the Ashland Animal Rescue Fund, who will be collecting donations on site.

The Wilson Halloween House is located at 2548 S. Sixth St. More information can be found at https://www.facebook.com/wilsonhalloweenhouse/

Virus being spread at community events In their meeting on Tuesday, the Lawrence County Commissioners went through their items on... read more