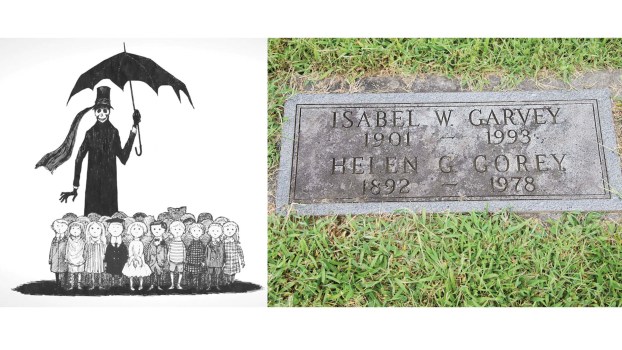 CEMETERY WALK: Acclaimed illustrator’s ashes were interred in Ironton in 2000

Woodland Cemetery in Ironton is home to many notable burials, and lives of those interred there have been well documented by local historians. Yet, for nearly 20 years, the remains of one of, if not the most famous, individual in the cemetery have resided unmarked on the grounds.

When illustrator and writer Edward Gorey died on April 15, 2000 at the age of 75, obituaries across the globe paid tribute to his work and influence. His art, a mix of macabre and whimsy, has inspired a host of creators, including comics writer Neil Gaiman, filmmakers Tim Burton and Guillermo Del Toro and “Lemony Snicket” author Daniel Handler.

Often featuring Victorian-era gentlemen, waifs and Jazz Age flappers as recurring characters, his work is instantly recognizable, with his eerie style earning him the nickname of “The Godfather of Goth.”

And though he never explicitly wrote for children, many of his books have become popular with younger readers, particularly those with a developing sense of black humor.

His best-known work along these lines is likely 1963’s “The Gashlycrumb Tinies,” an alphabet book with each letter dedicated to a child who meets an unfortunate fate. (“A is for Amy who fell down the stairs, B is for Basil assaulted by bears.”)

He often used his talents to illustrate great works of the past, such as a bestselling edition of H.G. Wells’ “War of the Worlds,” published in 1960, as well as novels by Bram Stoker, F. Scott Fitzgerald and T.S. Eliot. He revisited Stoker’s classic in 1977, designing costumes for Broadway revival of “Dracula,” for which he won a Tony Award for Best Costume Design.

Maintaining a strong, but cultish following, his work probably saw its greatest penetration into the general public conscious when he co-directed the animated opening to PBS’ “Mystery,” in which actor Vincent Price hosted each week from “Gorey Mansion.”

According to “Born to Be Posthumous” author Mark Dery’s comprehensive biography of Gorey, which was published in fall 2018, Gorey’s ashes were interred at Woodland two months after his death, in the plot of his mother, Helen Garvey Gorey, who lived from 1892 to 1978. The marker on the plot lists her name, along with her sister, Isabel Garvey, a journalist, who died in 1993.

In Dery’s biography of Gorey, he said that the Buckeye Monument Company in Ironton received an inquiry from a funeral director in Cape Cod about erecting a monument to the artist. A price quote was given, but it was never followed up on.

Portions of Gorey’s ashes were also said to have been scattered at sea with those of his cats and spread at his home in Cape Cod. The 200-year-old home, which he purchased in 1979, now serves as The Edward Gory House, a museum preserving his work and legacy.

Gorey, who had no children, left the majority of his fortune to a charitable trust, which benefits the welfare of cats and dogs, as well as other animals.

His legacy remains strong and his books continue to sell well, two decades after his death. Dolls, stickers and other merchandise based on his work can be found at many a book store and the rights for his work have been optioned by Jim Henson Studios and a motion picture release has been in development for several years.

Gorey once suggested two possible epitaphs for a gravestone: “Not really” and “Oh, the of it all!”

“Without anything in the middle,” Gorey told interviewer Richard Dyer of the latter pick. “Just leave the middle out.”

For information on Gorey’s life and work, visit www.edwardgoreyhouse.org.