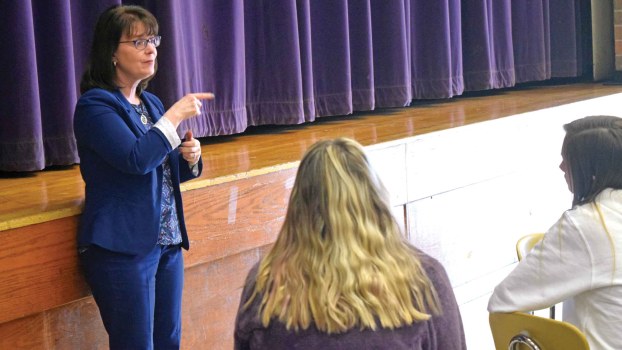 Ohio Supreme Court Justice Judi French speaks to students at Chesapeake High School in March 2019. French is running for re-election to one of two seats on the ballot in the general election for the state’s high court. (The Ironton Tribune | Heath Harrison)

Rove’s fundraising plea focused on not wanting Republicans to yield power over redistricting to Democrats, whose own line-drawing effort has been joined by former President Barack Obama and his attorney general, Eric Holder.

A letter obtained by The Associated Press shows Rove, who served as President George W. Bush’s chief political strategist, pleading with wealthy donors and various Ohio law firms to donate to Republican Justice Judith French’s campaign as the court’s conservative majority is up for grabs on Nov. 3.

“I don’t often lend my name to statewide races, but Judi French’s race is too important,” Rove writes.

The letter is the latest indication that local and state races, sometimes overlooked in a general election season, are seen as instrumental for both political parties this year.

The former Bush adviser lays out what he calls the high-stakes race between French and Democratic state appeals court Judge Jennifer Brunner, a one-time U.S. Senate contender and former Ohio secretary of state.

Rove tells potential donors “well-funded left-wing interest groups from outside Ohio” are vying to unseat French in order to redraw the lines of state legislative and congressional districts to benefit Democrats.

In an email, Rove said his pleas for donations to French are unrelated to his work for the Republican State Leadership Committee, a national group whose board he joined in April. The group, which focuses on electing Republicans in state-level races, has also taken an interest in Ohio’s Supreme Court races.

The group recently aired a TV campaign against Brunner, saying “reckless” judges like her “risk our children’s safety,” in reference to a February case she ruled on that involved a teacher convicted of voyeurism for recording videos of girls undressing.

The state Democratic Party defended Brunner, saying she followed the law in a “difficult case,” and called for French to disavow the ad and demand the RSLC take it down.

Records show the committee has been funneling donations to its two initiatives, the Right Lines Initiative and the Judicial Fairness Initiative, ahead of the 2020 election season, in an effort to dominate the legislatures and high courts in major battleground states like Ohio. Right Lines 2020 is a project intended to produce district maps that will help the GOP party over the next decade.

In his letter, Rove notes the more than $50 million the National Democratic Redistricting Committee has pledged to spend this election cycle, and he urges Republicans to fight back. The Democratic initiative, led by Holder and backed by Obama, has endorsed 200-plus state candidates and invested about $2 million into the contests.

“This is a real threat to Ohio, and if Judi is defeated for reelection, it will have national ramifications,” Rove writes.

On the other side of the aisle, the RSLC’s Judicial Fairness Initiative is the project funding campaigns like French’s Supreme Court race, with at least $1.2 million funneled into the project in 2019 alone, according to the group’s filings.

Other major funders of the initiative include the family of Education Secretary Betsy DeVos, who gave the RSLC around $950,000 between 2015 and 2017. The political group also got more than $250,000 from the for-profit tech education company K12 Inc., whose investors have included DeVos and Michael Milken, the convicted junk-bond king pardoned by President Donald Trump earlier this year.