Ironton looks for a measure of revenge against Johnnies 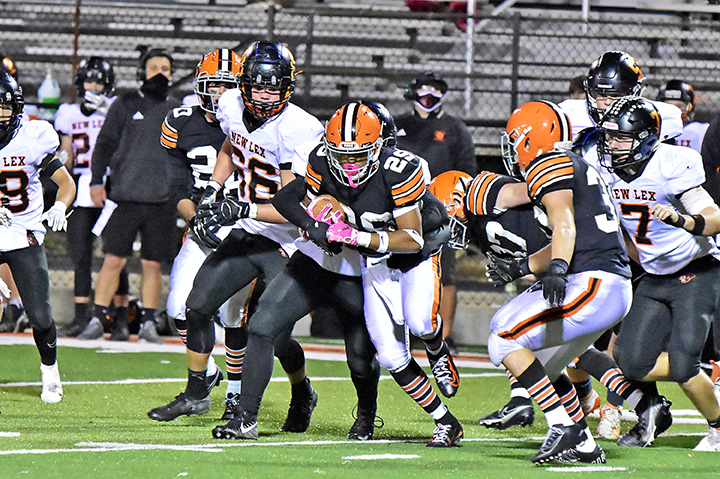 It’s time to settle another score.
Ironton’s 49-3 win over the New Lexington Panthers last Saturday in the Division 5 playoffs avenged a 38-6 playoff loss in 2008, the only previous meeting between the two teams.
This Saturday, Ironton will host the Johnstown-Monroe Johnnies in a Division 5 playoff game and the Fighting Tigers are looking for a little bit of revenge.
When Ironton has faced the Johnnies in the 2011 and 2012, J-M had a powerhouse team and beat Ironton 34-7 and 42-7.
The Johnnies reached the state finals in 2018 after opening the playoffs at home against Ironton and held on for a 15-7 win.
This time, Ironton is not only the heavy favorite but is a focused team on a mission to grab the brass ring after falling just short in the state championship game last season.
Johnstown has thrown the football a little more this season than in the past but that is due more to their traditional power running game not as dominant as their good teams of the past.
The Johnnies are 6-2 but the only wins they have against opponents with winning records are Division 7 Newark Catholic (4-3) in the first game of the season — 13-10 in overtime — and Wellston (5-3) last week when they only led 10-6 until the fourth quarter.
The two losses are to 7-1 Heath and 4-2 Granville.
The ground attack is still solid led by senior Wes Myers (5-8, 165) who has 877 yards on 117 carries — that’s a 7.5 yards per carry average — and he has scored 15 touchdowns.
Senior Jaden Jacob (5-10, 170) has 43 rushes for 204 yards and six TDs.
Junior quarterback Joe Sahr (5-10, 165) has 76 carries for 454 yards and a 6.0 yards per carry average. He has scored three touchdowns.
Sahr is also 29-of-60 passing for 403 yards but no touchdowns.
Junior tight end Jake Lusk (6-4, 245) has 11 catches for 187 yards while senior wide receiver Brandon McConnell (6-1, 160) has 10 receptions for 104 yards.
Lusk is the main force on defense from his end position. He has 48 tackles including 12 for a loss with six of those quarterback sacks.
Another key player on defense is junior Justin Larochell (6-0, 170) who has 58 tackles and six tackles for a loss.
Sophomore end Garrett Grinstead (6-4, 205) has 33 tackles, four for a loss and two sacks.
Sophomore Caleb Schneider (5-11, 170) is the middle linebacker and he has 42 tackles. Schneider is also the punter and placekicker. He averages 39.6 yards on his punts and he has kicked 17 extra points.
Ironton comes into the game unbeaten in seven games and unchallenged, outscoring opponents 357 to 40.
The offense and defense revolves around Ohio State recruit and All-American candidate Reid Carrico.
The 6-foot-3, 235-pound 85 for 1,053 yards and he has scored 17 touchdowns. He also leads the defense in tackles.
Trevor Carter has 327 yards on 37 carries and four TDs and Cameron Deere 154 yards on 24 attempts and three scores.
Deere also teams with Carrico to give Ironton a Batman and Robin dynamic duo at linebacker.
Sophomore quarterback Tayden Carpenter is 56 of 88 for a 65 percent completion rate. He has thrown for 986 yards and 16 touchdowns. He has been intercepted just twice.
Carpenter has also rushed 18 times for 132 yards and two touchdowns.
Ironton has a receiving corps led by senior Trent Hacker with 13 receptions for 322 yards and four TDs. Aaron Masters is next with 215 yards on eight catches with three scores and Carrico had 74 yards on five catches.
Landen Wilson had 80 yards on six grabs, Kyle Howell 99 yards on six catches and a TD, Erickson Barnes 60 yards on two grabs, Will York had 56 yards on four receptions, and Jaquez Keyes has 10 catches for 53 yards.
Besides Carrico and Deere at linebacker, the defensive line has been dominating.
The defensive line consists of a rotation that includes Nate Cochran, Gunner Crawford, Ashton Duncan, Dalton Crabtree and DeAngelo Washington that can stymie offensive lines and put pressure on opposing quarterbacks.
The outside linebackers are Lincoln Barnes and Crabtree with Hacker and Wilson the cornerbacks and Howell and Uriah Meadows the safeties.
Howell does the punting and Jimmy Mahlmeister has been 46 of 46 on extra points.

Ratings power 10 stars. What else could it be? The Buckeyes are one of the best teams in the nation.... read more