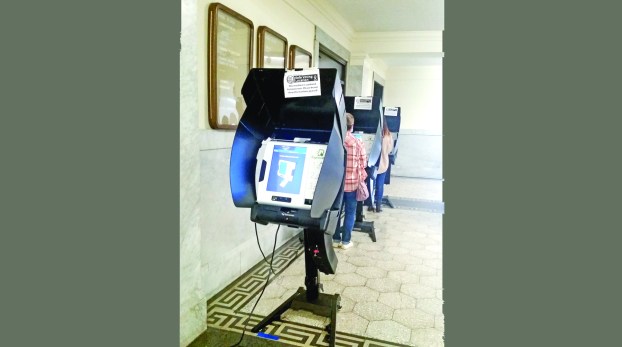 Cheryl Conzett and her daughter, Emily Conzett, both of Proctorville, took advantage of Ohio’s early voting and cast their ballots on Monday afternoon. (The Ironton Tribune | Mark Shaffer)

Board of elections seeing high number of voters

With the general election less than two weeks away on Nov. 3, to say the Lawrence County Board of Elections workers have been busy is an understatement.

On Monday afternoon, four of the six voting machines in the lobby of the Lawrence County Courthouse were in use and there was a short line of people waiting to talk to a board of election worker.

Two of the people using the machines were daughter and mother, Emily Conzett and Cheryl Conzett, both of Proctorville, who were out running errands and decided Monday was a good day to vote.

“Just wanted to get that vote in early. If you vote early, might as well get it over with,” said Emily Conzett. “I planned to get it done as soon as possible and now, I’ve done my duty.”

This is the second time she has been old enough to vote in a presidential election.

“It is a right that I have and I feel it is an important right to exercise,” she said.

Cheryl Conzett said she voted on Monday because it was convenient.

Interest has been high because of the presidential election between President Donald Trump and former Vice President Joe Biden. Plus, there have been fears that mail-in ballots won’t get back to the board office in time to be counted because of issues within the U.S. Postal Service. Some states with early voting have had long lines of voters, who in some cases, waited hours to cast their ballot.

All that has lead to a high number of people voting early.

In the last presidential election in 2016, around 62 percent of Lawrence Countians voted. Snider said they expect that by the time voting ends at 7:30 p.m. on Nov. 3, there will probably be more voters this time.

And to lessen the potential spread of COVID-19, each voting machine is sanitized after each voter.

“We also have an alternative way to make the touch screen touchless,” Snider said. It isn’t very high tech, each voter is given a simple cotton swab, commonly known as Q-Tip. “It is something the vendor approved. After they are done voting, they can toss the Q-Tip.”

According to the Lawrence County Board of Elections website, as of Oct. 18, 9,929 absentee ballots have been sent out. Those break down to 8,234 mail-in ballots, 1,558 in-office votes, 82 at nursing homes, 54 from military personnel or overseas voters and one hand carry. Of those ballots requested, 4,316 were by people that don’t register with a political party, 3,437 were Republican, 2,174 were Democrats and two are members of the Green Party.

Mail-in ballots have to postmarked by Nov. 2, the day before the general election.

In the 2016 presidential election, Lawrence County had 44,144 registered voters and there was a 62 percent turn out with 27,239 voters casting ballots.

This year, there are 44,122 Lawrence Countians registered to vote, with the vast majority, 26,925, unaffiliated with a party. There are 12,267 registered Republicans, 4,920 registered Democrats and 10 members of the Green Party.

According to the Associated Press, nearly 8.1 million Ohioans are registered as of Oct. 13 to vote in the 2020 election. The last time voter registration was that high was in 2008 when Democrat candidate Barack Obama faced Republican John McCain.

The AP said that Democratic registrations have risen by over a quarter of a million since 2016, to nearly 1.6 million. The number of registered Republicans fell by 120,000 over the same period, with GOP President Donald Trump in the White House — but the party remains the larger of the two, at 1.9 million people. Most voters in the state, more than 4.5 million people, remain unaffiliated.

For more information on how to register to vote, go to https://www.ohiosos.gov/elections/voters/register