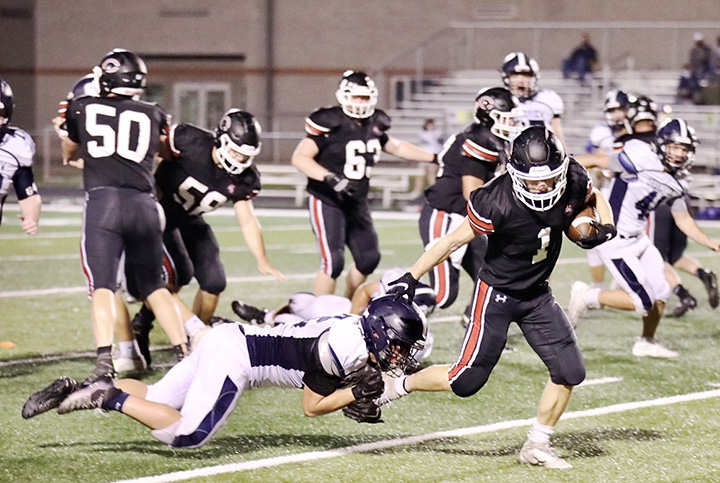 COAL GROVE — The eyeball test will need some glasses.
At first look, fans see one team named the Loudonville Redbirds and the other team as the Coal Grove Hornets. They see one team wearing red and gray and the home team in black and white.
But there are a lot of similarities and they will be on display along with their differences when the two teams meet at Coal Grove on Saturday in the Division 6 regional quarterfinals.
Last season, the Redbirds went 1-9 playing a tough Principals Athletic Conference that is filled with Division 4 and 5 teams. They were 1-5 this season before posting two postseason wins including a 42-41 upset of No. 2-seed Centerburg last week.
Coal Grove was 2-8 last season as a D6 team playing against mostly D5 team and one D4. This season, the Hornets were 3-2 in the league and have won two playoff games as well including 41-38 at No. 8 seed Shenandoah last week.
But the similarities stop there.
Coal Grove (5-2) relies on a ball-control, power running attack on offense while the Redbirds (3-5) spread the field and mix the run with the pass.
Loudonville scrapped its run-oriented offense just prior to the start of the season and it has paid dividends in the playoffs.
Freshman running back Sam Williams-Dixon has 975 yards on 148 carries — a 6.34 yards per carry average — and he has scored nine TDs.
Senior quarterback Logan Huffman is 105 of 211 for 1,336 yards and 12 touchdowns but he has thrown 14 interceptions.
Leading the receiving corps is senior Chuck Ganson (6-1, 190) with 32 receptions for 376 yards and a pair of scores. Freshman Kyle Maltarich (6-1, 155) has 17 catches for 354 yards and five scores. He is the son of the third-year head coach Kevin Maltarich.
The offensive line is led by seniors Bo Regan (6-0, 220) and Ben Stanger (6-2, 240) who are a pair of returning starters.
Defensively, the Redbirds lean on senior linebacker Brock Weiser (6-3, 200) and sophomore Peyton Regan (5-9, 210)
Coal Grove doesn’t hide anything and doesn’t get fancy. The Hornets just run at, over and through defenses.
Senior fullback Austin Stapleton (5-10, 240) leads the team with 935 yards on 143 carries and 16 touchdowns. His career touchdown total sits him atop the program’s record books.
Junior Malachai Wheeler (5-8, 160) has had a strong season with 116 carries for 763 yards and eight touchdowns. Sophomore Chase Hall (5-8, 160) has been a nice complimentary back when called upon and has 293 yards on 38 carries.
Defensively, the Hornets are led by senior Ben Compliment (6-3, 260) who dominates opposing line as an end or tackle. Compliment is also the Hornets’ best offensive lineman.