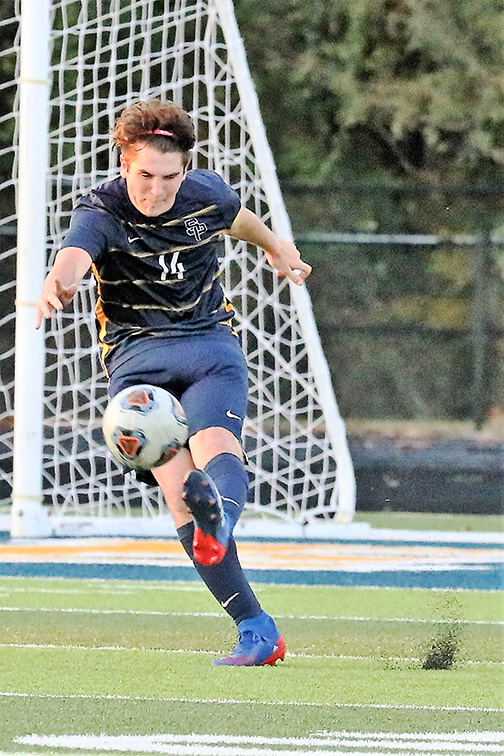 SOUTH POINT — Finally, the South Point Pointers’ soccer team is moving on in the postseason tournament.
After 22 years without a sectional title, the Pointers blanked the Belpre Eagles 7-0 on Wednesday to earn the program’s first sectional championship.
“We finally got the monkey off our back,” said Pointers’ coach Zach Jenkins. “Coach (Jeff) Joy was very unfortunate because he has some really good teams but there were only two divisions several years ago.”
South Point (10-5-1) plays at North Adams in the district semifinals Saturday at 11 a.m.
“Our kids have worked hard for this since May when COVID was lifted. But we know the job is not finished. The goal all season has been to win the OVC and then district champions,” said Jenkins.
“We came up a big short on the OVC but we still are driving for our school’s first district title.”
Tyler Lilly took it upon himself to make sure the Pointers won the title. He had a haul as he scored four goals.
Braylon Balandra gave the Pointers a 1-0 lead nine minutes into the game as he got an assist from Josh Helton.
Lilly then boomed a 30-yard kick into the upper right hand corner of the net for an unassisted goal just one minute later and it was 2-0.
Lilly scored the next two goals with assists from Erikai Jackson and Joey Bloebaum at the 13 and 16-minute marks, respectively.
Lilly got his fourth goal with Jackson’s help for the second time when he scored at the 43:00 mark of the second half.
Tanner Runyon scored the final two goals with an assist from Balandra and one from Zane Walters.
Pointers’ goalkeeper Jaylon Halfhill had eight saves.
Belpre 0 0 = 0
South Point 4 3 = 7
First Half
SP – Braylon Balandra (assist Josh Helton) 9:00
SP – Tyler Lilly (unassisted) 10:00
SP – Tyler Lilly (assist Erikai Jackson) 13:00
SP – Tyler Lilly (assist Joey Bloebaum) 36:00
Second Half
SP – Tyler Lily (assist Erikai Jackson) 43:00
SP – Tanner Runyon (assist Braylon Balandra) 61:00
SP – Tanner Runyon (assist Zane Walters) 68:00
Saves – Belpre 17; SP: Jaylon Halfhill 8
Corner kicks – Belpre 3, South Point 9