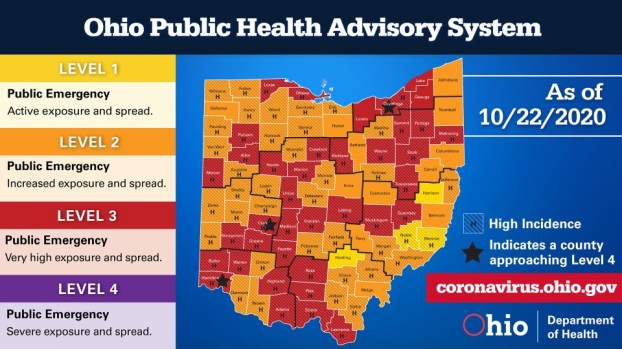 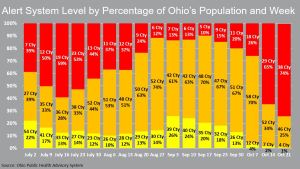 COLUMBUS — Lawrence County reminded at Level Three Red for the third week on the latest COVID-19 map issued by the Ohio Department of Health on Thursday.

Gov. Mike DeWine said the latest map update featured an “alarming number” of counties now at the designation, with 38 listed at Level Three.

“This is an increase from 29 red counties last week,” DeWine said a t his news conference. “We also have three counties that are now on the watch list: Clark, Cuyahoga and Hamilton counties.”

The watch list is for counties that are approaching Level Four Purple, the highest and most severe designation on the four-tier system, which was implemented over the summer. No counties have reached that designation since the system was implemented.

It was the most severe COVID-19 infection map for the state so far, with only four counties in Ohio — Hocking, Monroe, Harrison and Noble — were listed at the lowest designation, Level One Yellow.

Locally, Scioto County also was at Level Three Red and, like Lawrence County, was in its second stint at that level since the alert system began.

Lawrence County and its neighbors all had an “H” designation, denoting a high rate of incidence. Most counties in the state had this designation. 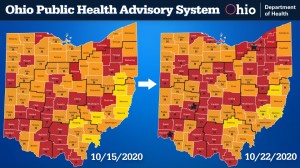 DeWine said the spike can be turned around.

“COVID-19 is multiplying very quickly — and it will continue unless we do something different,” he said. “More of us need to wear masks, and more of us need to be careful. We’ve done it before, and we can do it again.”

He urged Ohioans to be more cautious.

“It’s time to pay attention and get serious,” DeWine said of the state’s status. “The spread of COVID-19 is getting worse by the minute. The government is not going to come knocking on your door to make sure you aren’t having a party — we all have a personal responsibility to take precautions and stay safe. We’re going to get through this. A vaccine is coming, but it’s not here yet. We have no immunity, and we are exposed. Once you get around others outside of your family, you must be alert, and you must take precautions.”

Dawson-Bryant board member to receive award

Drummond honored for 25 years of service COAL GROVE — A Dawson-Bryant school board member is set to receive an... read more