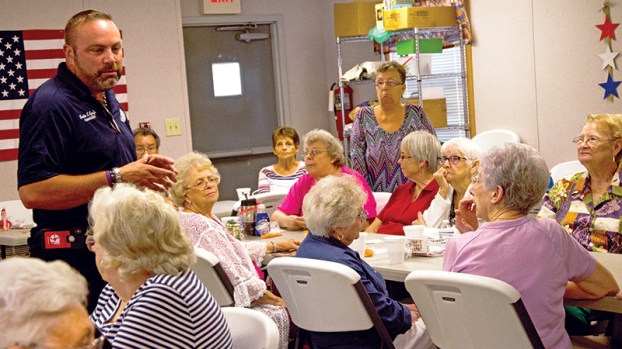 Lawrence County Commissioner Freddie Hayes Jr. discusses the upcoming construction of a new senior center at the Lawrence County Fairgrounds with members of the Sybene-Chesapeake Senior Center and director Darlene Green in 2018. (The Tribune|Heath Harrison)

Progress made on new senior center

CHESAPEAKE — Members of the Sybene-Chesapeake Senior Center got some welcome news this week from the Lawrence County Commission.

Commissioners said at their meeting on Tuesday that they are in the final stretch of preparations for a new senior center, to be constructed at the Lawrence County Fairgrounds in Rome Township.

In 2018, the Ohio Legislature appropriated $1 million for construction of the facility.

A lot of people have had questions about it and why it hasn’t been constructed yet,” Commission President DeAnna Holliday said during the meeting. “The truth of the matter is that the processes, particularly with government money, can take a little while.”

Ohio University is the fiscal agent handling the funds and Holliday said they are nearing approval and being able to utilize the money for the project.

“So that money is still very much alive and well, but we have had a lot of hurdles and hoops to jump through,” she said, adding that the port authority gave its approval on Tuesday.

“So hopefully we see some movement on that in the next few months.”

Holliday said there were certain criteria that had to be met through the university.

“One of those is senior education,” she said as an example. “And that will be offered there.”

She said she expected it to be one to two months for things to be finalized and then they can start moving forward. She said a rough estimate on a time frame for a groundbreaking would be the first quarter of 2021.

Commissioner Freddie Hayes Jr. said it took longer than they wanted but COVID-19 has slowed down a lot of things down.

“We are going to get this done, it is something I promised when we went after the $1 million,” he said. “This is great news.”

Holliday agreed that COVID had slowed things and pointed out that projects through the government can typically take time to go through an approval and legal process before work can begin.

The senior center currently is housed in a modular unit outside of the Chesapeake Community Center, where it has been for six years.

Darlene Green, it’s director said she and its members were “tickled to death” to hear of the progress.

“We’ve wanted this for so long and we’ve patiently waited,” Green said. “We’re ready to make the move.”

Green said the center has been closed since March, due to the COVID-19 pandemic.

The center typically has a robust schedule, with members meeting three times a week, taking trips and hosting events like their monthly Our Day dinners at First Baptist Church in Proctorville, which draw hundreds.

“Everything has changed because of quarantine, Green said.

She said, though they miss the camaraderie, they had to close in order to protect members health and avoid the risk of becoming a hot spot for the virus.

“I’ve been afraid to do a gathering,” she said. “Our members haven’t seen each other since March.”

She said, in the meantime, she has stayed in touch with members on Facebook and by phone, checking in to see if they need anything.

She said she recently collected photos of members and used them to decorate a pumpkin patch, which was shared with everyone.

She said she is hoping to set up conference calls soon as well, so they can all catch up and socialize remotely.
“It will be great for them to hear everyone’s voice,” she said.